Says he won’t run for Putnam County executive or Congress

Sometimes mercurial and seemingly irrepressible, Greg Ball, Philipstown’s state senator before a 2012 redistricting, announced Friday he would not seek re-election, choosing to “term-limit” himself rather than break a promise to never stay too long in a given office.

In his May 16 announcement in Westchester County, Ball also ruled out a campaign for Putnam County executive or U.S. Congress. A Republican, had he opted to pursue one or the other, he would have triggered a party struggle with either incumbent Putnam County Executive MaryEllen Odell or former Rep. Nan Hayworth, who wants to oust Rep. Sean Patrick Maloney, the Democrat who beat her in 2012.

On learning of Ball’s intent, Maloney thanked him for his public service, especially in veterans affairs.

Other than “return to the private sector,” Ball did not declare exactly what he intends to do next. 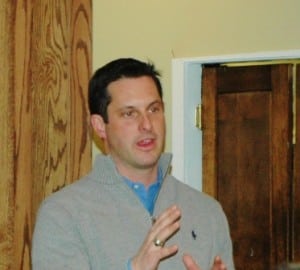 “As many know, I term-limited myself in the Assembly and am proud to now follow through on that same pledge in the Senate,” he said. “As an elected official, and unlike many, I swore to make the position my full-time job and to not accept outside employment. I kept my word and am proud to have done so. But now it is time to return to the private sector, and eventually, hopefully take time to raise a family.”

Ball, 36, a former Air Force officer, said he is calling it quits now rather than in another two years because he didn’t want to leave the job open in a presidential year.

Elected in 2010, he represented Philipstown until it became part of the 41st district, which chose Terry Gipson, a Democrat, as its senator in 2012.

Ball cited his record on issues involving “service-disabled and other veterans, victims of human trafficking and domestic violence, small-business owners, sportsmen, seniors, taxpayers, the special-needs community and our four legged friends” — the latter a reference to his fondness for dogs and opposition to so-called unscrupulous “puppy mill” breeding operations.

He praised various reform efforts of Gov. Andrew Cuomo, a Democrat, and sometimes blasted fellow Republicans. “I hate both political parties!” he told a Cold Spring gathering in 2012.

Over the years, Ball also championed individual rights when it came to gun ownership and gun privacy but not same-sex marriage. He backed Putnam County Clerk Dennis Sant, when the latter refused to make supposedly public records on gun ownership available to citizens and the press, and opposed the NY Safe Act gun-control law. But Ball voted against the 2011 New York law allowing same-sex couples to wed, though he later criticized efforts by adversaries of the law to overturn it, saying that “democracy won” and that everyone should accept the results.

Maloney expressed gratitude to “my friend Greg for his years of service to his country as well as Dutchess, Putnam and Westchester Counties. I’ve been proud to reach across the aisle and partner with Greg and his excellent staff to get results for all our neighbors, especially our veterans, small businesses, and communities combatting the heroin epidemic,” Maloney said. “I wish him well, and hope he spends more time with that most excellent pooch of his, Tito.”