The Haldane Central School District and the Garrison Union Free School District both received voter approval for their budgets and propositions on Tuesday, May 20. Incumbent board of education candidates also won in both districts.

A separate referendum on increasing Garrison property taxes to provide the Desmond-Fish Library with an annual $75,000 appropriation also won by a vote of 314-182.

“I am so excited for the opportunity to expand our services to meet our patron’s needs and to continue our work in contributing to the social, cultural and intellectual life of our community,” said Jen McCreery, director of the library, just after the results were announced at the school.

Increased pressure from state mandates and cutbacks in state funding forced both districts to make difficult choices about using money from reserve funds to balance the budget, but in the end, both were able to maintain programs for students. 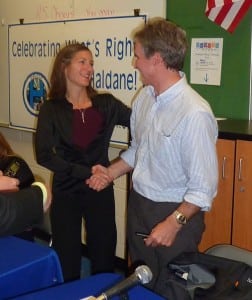 Peter Henderson accepts congratulations from Trustee Jennifer Daly after the news of his re-election to the Haldane Board of Education. (Photo by P. Doan)

For Haldane, saving some programs and instructional positions came just days before the vote when the Haldane Faculty Association agreed to a collective bargaining agreement proposal that allowed for the preservation of the art and sports programs that were slated for reductions, to the dismay of everyone involved. HFA members will vote on the contract proposal in the next week or so, according to middle school teacher and President Leah Horn.

Budgets passed by a margin of nearly 3 to 1 in both districts and the tax levy rate is below the state’s mandated 2 percent increase in both cases as well.

Although funding for the 2014-15 school year is secure for now, the districts will continue to struggle with decreased funding from the legislature and restrictions on the tax levy rate in coming years unless something shifts statewide. Changes passed in 2009 reduced school funding and capped the tax levy rate districts could propose based on a uniform formula. Threats to extracurricular programs and non-mandated subjects like art and music will continue.

Two other Haldane propositions authorizing the purchase of transportation vehicles and funding a reserve account for field repairs passed easily.

Board of Education elections

No new trustees will join the Board of Education in either district. Incumbent Peter Henderson was re-elected for a second term to serve on the Haldane board, defeating challenger Cathy Sapeta with a vote of 557-207.

Diana Swinburne and James Cannon both were re-elected in Garrison to serve fourth terms with 329 and 303 votes, respectively. Challenger James Hoch, who didn’t file to be on the ballot but asked voters to write in his name, received 178 votes in a third-place loss for the two open seats. Swinburne told The Paper she thought voters moved to retain individuals who had a record of financial stewardship over the district’s finances

Returning incumbents to the board could be interpreted as a sign of approval for both boards’ efforts and direction. Each has had a hard working year. In addition to grappling with budgets and the implementation of Common Core standards, both boards had to recruit and hire interim and permanent superintendents. Laura Mitchell assumed leadership as the superintendent in Garrison in April, and Dr. Diana Bowers joins Haldane as superintendent in July.

Proposition I: School Budget
Shall the Haldane Central School District be authorized to spend an amount not to exceed $22,405,488 during the 2014-2015 School Year for the purposes shown in the statement of estimated expenditures by the Board of Education with such sum raised by levy of tax upon taxable property of the school district? 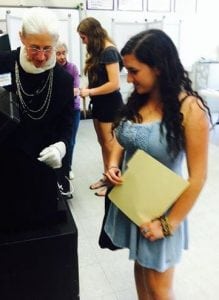 Their time at Haldane may be coming to an end, but as 18-year-olds newly eligible to vote, Maya Curto (foreground) and Shauna Ricketts are playing a civic role in their school’s future, voting in the school election today. (Photo courtesy of Shauna Ricketts)

Proposition II: Transportation Proposal
Shall the following Resolution be adopted, to wit: Resolved, that the Haldane Central School District at Philipstown, New York, is authorized to purchase student transport vehicles, at a maximum estimated cost of $150,000, and said amount, or so much thereof as may be necessary, shall be raised by the levy of a tax upon the taxable property of said District and collected in annual installments as provided by Section 416 of the Education Law; and, in anticipation of such tax, obligations of said District shall be issued.

Proposition III: Reserve Fund for Field Use Fees
Shall the Board of Education of the Haldane Central School District fund the repair reserve fund established by the Board of Education pursuant to the provisions of Section 6-d of the General Municipal Law, by transferring up to $25,000 of unappropriated, unassigned fund balance from the 2013-2014 school year to the repair reserve fund?

Budget
Shall the sum of $10,051,660 be appropriated to meet the estimated expenditures of the Garrison Union Free School District, for school purposes, for the fiscal year July 1, 2014 through June 30, 2015, and the necessary tax be levied for same, upon the taxable property of the school district, after first deducting the monies available from State Aid and other sources?

Desmond-Fish Library Referendum
Shall an annual appropriation of $75,000, separate and apart from the Garrison Union Free School District annual school district budget, be approved to support and maintain the Alice Curtis Desmond and Hamilton Fish (DFL) Public Library, which sum shall be raised annually by a tax upon the taxable property of the school district, and which appropriation shall be the annual appropriation for the library until changed by further vote of the electors of the school district, and such tax shall be levied and collected yearly as are other general taxes and paid over to the Library Trustees?