The intersection of film and dance has yielded spectacular moments in celluloid, some noteworthy for the straightforward capture of an otherwise ephemeral piece of choreography, others just as noteworthy as representations of the fluidity, tension and pacing in an innovative cinematic technique.

Kinetic Cinema, the dance film division of Pentacle, a not-for-profit management support organization for dance, has been working for the past five years to fuse these two things together, focusing on films about dance. Through Kinetic Cinema guest artists are invited to show dance films and videos that have been influential to their own work. Pentacle has presented these evenings for the past five years throughout New York City and is currently running them at Spectacle Theatre in Williamsburg, Brooklyn.

Now, for the first time, supported by a grant from the New York State Council on the Arts, they are bringing a series of workshops and screenings to Beacon, presenting four during May and June at Beacon Project Space (formerly Beacon Yoga) in which up to 10 participants, ages 14 and up, will learn the process of making a dance film and then watch a screening of dance films, interacting with the director afterwards. Participants will make their own short film to be screened at the last session. Sessions will be led by guest artists, co-facilitated by Anna Brady Nuse of Pentacle.

Nuse has worked in this vein for about five years, first through monthly screenings at the Collective Unconscious space in Manhattan, and more recently in Pentacle’s permanent home at Spectacle, a community screening space in Williamsburg. Recently they were invited to host screenings and filmmaker talks at the Institute for Contemporary Art in Philadelphia.

Nuse, who moved to Beacon over three years ago, has a background in dance (ballet and modern) — working for 10 years with small, independent choreographers in New York City. At a certain point she became more excited about film.

“I realized I was choreographing from a film perspective and becoming frustrated with the limits of stage,” she explains. “I got excited about going between time and space, using jumps, close-ups.” Diving into the archives at the Dance Films Association in New York City, she discovered that they, as archivists, began with the notion of preserving the work of choreographers (Isadora Duncan onwards) on film, but switched at some point to collecting examples of filmmakers’ work in dance, beginning with the works of Maya Deren. 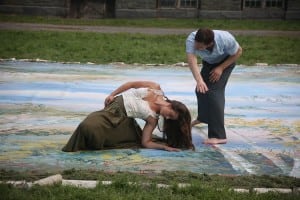 Now, with the much-reduced cost of digital filmmaking, Nuse says there has been an “explosion” in the filming of dance. “It’s booming. The younger generation of choreographers thinks in terms of media and filming along with the dances themselves — they’re equally artistically strong. I wanted to help facilitate choreographers and dancers thinking about film. It started with me inviting them to think about a film or video which inspired them and use it as inspiration for their stage work. This wound up creating an energy about their stage work. Then I asked the reverse of filmmakers interested in dance, asking them to show, in their film, a dance which inspired them. I also brought in filmmakers who had already worked within the dance medium.”

Not only are different dance forms explored — from ballet to flamenco to Butoh and beyond, but each filmmaker approaches the subject with another layer of perspective, for example one, a sports videographer, chose dance films which she felt utilized that approach, while another examined the “looking at the body” from a feminist perspective.

“What’s interesting to me,” Nuse said, “is that there’s always a unifying thing where the films created really paint a portrait of the artist filming them and their creative process — you get an intimate idea of how they think and how they create.”

For the Beacon workshops, the goal is to give participants a taste of “how to capture motion and make it dynamic; how to resist the two-dimensionality of it,” according to Nuse. Each of the guest artists will lead a workshop focused on a different topic. The first will explore basic concepts and storyboarding while in the second participants will team up and go outside to shoot films. The third deals with editing, including practicing with software, and planning post-production; and the fourth will cover processing and last-minute tweaks.

Accompanying the first workshop, choreographer and filmmaker Gabrielle Lansner will screen her story-driven dance films. Lansner, who had a long career in dance before shifting to filmmaking four years ago, will discuss her creative process and the challenges she encountered in developing works for the camera that live somewhere between story, poem and metaphor.

On June 7, Victoria Sendra will show her improvisatory dance films and discuss her unique approach to shooting dance. On June 14, music documentarian Derrick Belcham will present his latest collaborative films made with choreographers and musicians including Sarah Neufeld (Arcade Fire), Skye Skjelset (Fleet Foxes), and contemporary choreographers Miguel Gutierrez, Melanie Maar, and Emily Terndrup. The June 28 screening will feature new works made by the participants of the Kinetic Cinema workshops as well as work selected by Nuse.

Beacon Project Space is located at 464 Main St., in Beacon. The cost for all the workshops, which take place from 11 a.m. to 1 p.m., is $75; this includes admission to screenings. Email [email protected] to register. Participants should wear loose or stretchy clothing. A video camera and computer are beneficial, but not required. Kinetic Cinema is happy to help participants find equipment to use or borrow for the workshops. Dancers who want to participate on-screen may drop in May 31 or June 7, at a cost of $20. Screenings begin at 2 p.m. and cost $5. Learn more at pentacle.org.