Grappling with the consequences of war

The idea of Memorial Day, known until 1967 as Decoration Day, goes back to the end of the American Civil War. It became a three-day weekend, along with other national holidays, by an Act of Congress in 1971, in the midst of the Vietnam War. For many people the creation of a Memorial Day weekend shifted the holiday’s emphasis from the remembrance of the war dead to vacations and shopping. Today there are still citizens who believe the day devoted to honoring the memory of the fallen in war should return to May 30 although there is no particular historic significance to that date.

No question this weekend marks the beginning of the American summer season with all its attendant commercial focus on recreation and diversion. The long weekend, for some extended to four or five days, presents an opportunity for a trip to the beach or the woods, gatherings with friends, attention to gardening, or other pleasurable pursuits.

The original intention of the holiday is not forgotten. Nationwide cities and towns, including Philipstown and Beacon, hold commemorative parades and other ceremonies marking the occasion on the appointed Monday. Visits to cemeteries, prayers, speeches patriotic music, hand-held American flags, sometimes a lone bugle playing taps, underscore strong emotions regarding the “ultimate sacrifice” so many have made in the defense of the republic.

For many, however, the ceremonies, the idea of remembrance and the collective expression of appreciation, are not part of the weekend’s planned activities. With wars of recent times smaller in dimension (if much longer in duration) and fought by a more select group of the population, the majority are perhaps more detached than ever from what is surely the saddest of holidays for families and surviving comrades of those who died in war.

Ever since Sept. 11, 2001, Americans have had a heightened sensitivity to threats to national security. And that collective concern gave rise to democratic permission to send troops to two foreign countries, Iraq and Afghanistan, to wage war. Those operations have placed military personnel in many other countries as well. 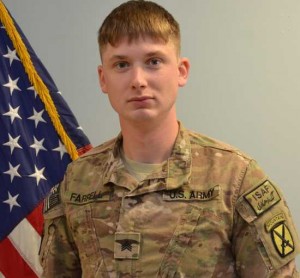 Since the nation entered Afghanistan 13 years ago and counting, 2,322 American military lost their lives in the war zone. Lest anyone fall into the numbing notion that this war is over recall that the body of U.S. Army Sgt. Shawn M. Farrell II, 24, was brought home to his wife and parents in Ulster County through Stewart Airport on May 5. Other soldiers from around the country were killed even later.

The Iraq war, once dubbed “Operation Iraqi Freedom” and then later morphed into “Operation New Dawn,” ended in December 2011 with a total of 4,486 military dead.

Memorial Day is not just for these dead of course. But by focusing a moment on the deaths from most recent national memory one can more starkly confront the reality of what the day might mean.

“Most of us keep war at arm’s length or greater. Even if we supported the wars in Iraq and Afghanistan, and more likely if we did not, they remain distant abstractions, not felt or engaged with in the way matters important to us do. Still, the wars were (we are still in Afghanistan) waged in our name. How do we account for our attitude?” The speaker is former Marine Phil Klay, author of the well-reviewed Redeployment (Penguin, 2014), a book of short stories depicting the Iraq war.

Klay recently appeared as keynote speaker at West Point on a night celebrating artistic works of the military academy’s cadets.

“I can’t think of a more important time, with so few serving in the all-volunteer military and the disconnect between the military and civilian worlds, for storytelling. War is too strange to be processed alone. What do you do to explain to the father of a fallen Marine what that Marine meant to you? I have had that experience. I am sure many in this room have had that experience. I assure you technical expertise doesn’t help,” Klay said before he read excerpts from his stories, which are told from the perspective of many different military roles and voices.

Nowhere in this region is the meaning behind Memorial Day felt more keenly and personally than within the walls of West Point. The lost lives of fallen comrades are carried about in the collective memory of those who have lived the stories like those in Klay’s book. West Point of course has its ceremonies of homage and remembrance. Last week, for example, alumni returned for their annual tradition of placing fresh wreaths on various memorials to the war dead. No doubt President Obama will refer to lost lives when he speaks at the academy’s graduation ceremonies next week.

Klay’s appearance is only one of many occasions at West Point where thinkers of all stripes wrestle with the questions, complexities and ultimate tragedy of war. In September the academy will host a major conference on World War l (116,000 U.S. dead), which began 100 years ago this year. This is the deeper engagement the society at large tends to avoid. Instead the culture mostly settles for sincerely felt but perhaps overly sentimental forms of expression that mask the horror, agony, doubt and pain felt by those who have lived while others have died.

It is a language of the heart that works to insulate us from the decisions we have made and paradoxically distances us from those whose military service we seek to recognize. We see it in the empty profusion of yellow ribbons and lapel-pin flags. We hear it in the organized celebrations of American heroes and patriotic values: celebrity public service announcements, beer commercials about military homecomings, the more jingoistic variants of country music, and the National Football League’s “Salute to Service” campaign. All these observances noisily claim to honor and celebrate, in the words of the NFL, “the service and sacrifice of our nation’s troops.” We have become exhibitionists of sentiment: The more public and theatrical our emotional displays, the better we seem to feel.

Yet sentimentality does more than shape the way we commemorate wars. It has real-world implications because it informs all those cultural and sociological attitudes in the shadow of which wartime and postwar policies are made, and because it prevents a more productive and enduring sympathy that, in cooperation with reason, might guide our actions and help us become more acute readers of war’s many ambiguities.

Both Klay and Samet attempt to bring attention to the need for taking realistic, reasoned responsibility for war’s consequences as a critical part of honestly honoring sacrificed lives as well as wounded warriors and all service members. They want Americans to honor military service by thinking more deeply before the next time the country believes war is necessary.

For Klay one way into genuinely understanding war is through the individual stories. That is his motive in writing them, not because they promote understanding in themselves but because stories begin the process of bringing people together to foster understanding. Bodies is a morbidly comedic story of a Marine assigned to the mortuary affairs unit that calls attention to the dark, granular side of dying in a war zone. Says the narrator:

I was from the unit that handled the dead. All of us had stains on our cammies. The smell of it gets into your skin. Putting down food is hard after processing, so by the end of the deployment we were gaunt from poor nutrition, sleep deprived from bad dreams, and shambling through base like a bunch of zombies, the sight of us reminding Marines of everything they know but never discuss.

Of course presence at a ceremony on Memorial Day has meaning. Reading Klay, Samet or others from the growing literature created by veterans of Iraq and Afghanistan can enhance that meaning.

Memorial Day prayers will be offered at 9 a.m. Monday, May 26, by Fr. Shane Scott-Hamblen of St. Mary’s and Rabbi Brent Spodek of Beacon Hebrew Alliance, appearing on behalf of Philipstown Reform Synagogue, at the corner of Routes 9D and 301, in Cold Spring. A service presented by VFW Post 2362 and American Legion Post 275 will take place at the Cold Spring waterfront at 11 a.m.

3 thoughts on “Memorial Day and Meaning”