New York State’s top open government official returned to Philipstown this month to conduct another primer on the state’s Freedom of Information (FoI) and Open Meetings laws, pointing out that town or village boards need not post agendas for meetings or take audience comments at them and can interview candidates for municipal committees — such as a planning board — in private. 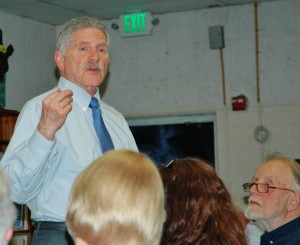 “The Freedom of Information law and Open Meetings law touch everything government does,” Freeman said. He should know. Since 1974, he has led the state’s open-government watchdog office, fielding questions from the public and government officials alike and, by his own account, enjoying it immensely. “I have what I’ve considered forever to be the best job in state government,” he said. “My client is the law. It’s a very unusual position.” If his client is the law, his supervisor is non-existent. “I don’t have a boss, which is a huge luxury,” he remarked.

The FoI and Open Meetings laws “are based on common sense” and reasonableness, he said. In general, to ensure openness, as a government body “if you can, you must; if you can with a reasonable effort, you must.” According to Freeman, that means — in one example — that “to the extent practicable,” a government body must provide the back-up materials for an upcoming meeting, so that the audience members can know what is being discussed or voted upon. Moreover, after scheduling a meeting, a town board or village board of trustees must notify the news media, post a notice in a public location, and, when practicable, put the notice and other information on its website, Freeman said.

However, he noted, government boards need not provide agendas. “The law says nothing at all about agendas. If a board wants to have one, great. If it doesn’t want to, that’s its choice,” Freeman explained.

He also shot down the notion that boards must approve minutes to make them official. “There’s no law that says their minutes have to be approved,” he said. What boards do have to do, he added, is prepare minutes within two weeks of a meeting and make them available to someone on request. But the minutes can be labeled a draft and remain subject to later revision, he said.

Furthermore, he said the audience has no legal right to comment at a public meeting. “If a board doesn’t want to let the public” speak up, “that is the board’s choice,” he said.

Answering a question he had also addressed during his previous presentation in Philipstown in 2012, Freeman stated that a town or village board can interview candidates for advisory boards in executive session, under an Open Meetings law exemption that permits closed-door sessions for discussions of the appointment of someone to a job or unpaid committee post.

He similarly observed that:

Freeman briefly discussed Putnam County Clerk Dennis Sant’s refusal to release county records — supposedly public documents — on gun ownership. “The county clerk, as I see it, really doesn’t care about the rule of law,” he said. “There was nothing new” about making information on permit-holders available, he declared. When news media pushed to get the information despite the opposition of Sant and other county officials the case got intense attention. Freeman said he was besieged with news media inquiries from around the globe. “It was insane,” he recalled. “I did the BBC at midnight via Skype.”

One thought on “Boards Need Not Have Agendas or Public Comments, FoI Expert Says”