What could be better than pancakes and eggs shared between multiple generations on a beautiful Tuesday morning in May?

The Garrison School sixth grade class and their guests, a contingent of local senior citizens, certainly seemed to enjoy themselves at what is now an annual event: a shared breakfast offering up more than just a repast.

The school’s guidance counselor, Mike Williams, thought up the event three years ago, choosing sixth grade because “at that age they’re just starting to become young adults. It’s a transitional year; they’re definitely not really kids and their world is opening up and meeting and really talking to these seniors opens it up some more. And it’s a great opportunity for the senior community to mix and mingle as well. There often isn’t much generational interaction — some of these kids only talk to their grandparents and no one else of this age.” 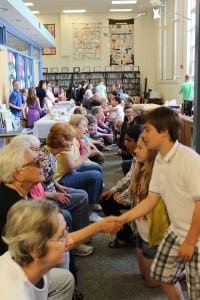 The 35 or so students spent the morning preparing the breakfast — mixing the ingredients together for the pancakes, breaking apart the sausage links, cooking away in Mary Foppiano’s classroom (normally the home of social studies). They set up long tables in the library and tended to their serving stations where kids like Donovan, Hayden and Henry enthusiastically dished out copious amounts of scrambled eggs, waffles and the rest, serving their elders first. Other students attended to the tables of seniors, pouring juice, clearing plates and otherwise being helpful.

While the seniors ate, they were entertained by a succession of New York State School Music Association (NYSSMA) soloists, vocal and instrumental, who performed; two renditions of Somewhere Over The Rainbow undoubtedly brought back many memories.

About 25 seniors attended, among them Terry Ridpath, a 1961 graduate (from eighth grade) of the school. Ridpath engaged in talking about his time at the school with today’s students.

Speaking to two young men, Ridpath told them that in his day “There was only one class for each grade — and there was a hot lunch daily. I still have one of my best friends from the time I went to this school,” he recalled. “Her mother was actually my third grade teacher, Mrs. Gunther, and she’s still alive.” Ridpath’s daughters attended Garrison School as well, “and also had Mrs. Gunther. It was a great school. When I was a kid there was no choice of high schools. That came in later, and with my girls, one attended O’Neill and one went to Haldane. I loved bringing up my children here — it’s a great place to live.” Expansive after the meal, Ridpath told the boys that he “didn’t have this belly when I came here. That came much later, and I’ve told my wife ‘I’m twice the man you married!’”

Ridpath, who gave the boys a bit of his personal history, explaining that he had stayed in the community, becoming a deputy sheriff before retiring as a captain, deemed the school “better now than it was then, because now there are more ethnicities — then there were only just white kids here. I had to wait until I was drafted and sent to Korea in 1967/68 to meet different people and understand that everyone’s the same.” Continuing to reflect, Ridpath said, “When I look at a picture of my class I can name all the other students, and you know, I can’t do the same for high school, even though it came later.”

Terry Ridpath regales a sixth grader with tales of the school in the late 50s and early 60s.

After both groups finished eating, the kids’ cleanup crew took over, and a sixth-grade girl was heard asking pleasantly, “Would anyone like me to take their garbage?” a question that would no doubt bring incredulous looks should she pose it within her home.

The meal over, it was time to break bread conversationally, with a version of “speed dating.” As the seniors each took seats along a line of chairs set up all in a row, students weaved around them, landing in front of a different senior every few minutes or so, as directed by Williams. Both seniors and students posed and answered suggested getting-to-know-you questions, at first relating to “careers, families and dreams” then to the more complex, asking seniors to “Give advice for our future in our country” and “What contribution do the seniors feel their generation gave most?”

One overheard reply urged the sixth grader in front of her to “Study hard and you can be whatever you want to be — hopefully. And hopefully it will be a little better when you grow up than it is now and that there are more jobs.” A second reply echoed some of these sentiments: “Study — you’ll be surprised at how much you can remember 40 or 50 years from now.”

The concluding activity was a dice game of Left, Center, Right, in which the seniors participated with the sixth graders cheering them.