Anne and I stopped for lunch in Missoula on day two of our cross-country road trip (the same one I wrote about a few weeks back). It was one of those shiny-clear, high-spring days when the air seems to be ringing with sunshine, and the city, which I’d remembered as dull from a visit a couple of decades earlier, now called out to me with its bright and friendly spirit. If we had wandered past a real estate office, I would have embarked on a full-blown relocation fantasy.

We did not, Google Maps having eradicated the ancient habit of hopeful wandering. Instead, we efficiently located our destination: a grocery store that had been recommended by the neo-grunge girl who’d served us warm scones at a wholesome little bakery in Idaho that morning — “A grocery store for lunch?” I’d probed. “Surely there must be a nice little sit-down place?” But she insisted she knew Missoula, and that this place was the best. 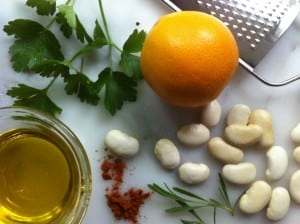 We weren’t sorry. The Good Food Store was like a fresh, young Whole Foods, a seedling that had not yet replicated itself weed-like across the landscape. Inside, we found gorgeous produce, cheese, and locally-baked goods, plus a prepared-foods counter with such excellent salads that Anne and I could have easily eaten a meal’s-worth standing there, requesting one sample cup after another, wanting them all.

Behind the glass sat one salad that vexed me, however. It included gigante beans, figs, and Marcona almonds, along with pecorino cheese and peppers. I simply could not put these ingredients together in my mind. Usually, a group of ingredients evokes some idea of a flavor. You can imagine more or less what a dish will taste like just by reading a recipe or the description on a menu: broccoli with sesame and soy versus broccoli with gorgonzola and walnuts — you just know. This one was a cipher.

Still, I couldn’t not try it, so I did, and, quite amazed, ordered some as part of my trio-of-salads plate. Anne did, too. We went outside, sat in the sunshine and relished our lunches, observing the pretty citizens of Missoula. Then we ate cookies, filled our thermoses with tea, and got back on the road.

Meanwhile, that salad had lodged itself in my memory. I was haunted by it. So, a few days after I arrived back home in Philipstown, I called the store and asked for the list of ingredients. Since then, I have almost made it three times — “almost” because I have yet to get it right, or even finish it completely. I have used roasted red peppers, but I suspect that what actually appeared in the dish was red chile flakes. I’ve gone too easy on the rosemary; too big with the zest. I’ve never added honey — it hasn’t needed it. And, above all, I have not been able to bring myself to include the figs. 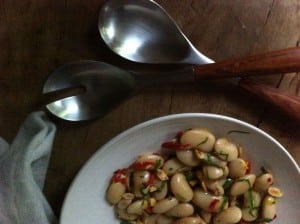 Figs? Figs?!? What are they even doing here? I cannot break free from the idea that they don’t belong in the same dish as gigante beans and almonds. Each time I make it, I arrive at a point where I taste the nearly-finished combination and it is so good I have to stop. Why tinker with deliciousness?

I have therefore served it fig-less to friends (and almond-less when I didn’t have any, and pecorino-less when one of my guests was vegan). No matter. It has been a knockout every time. The basic marinade is so lovely, I suspect it would make almost anything taste great. Even figs — if I could ever bring myself to give them another chance.

Begin soaking the beans a day ahead. Gigante beans (aka gigande beans) are giant white beans from the Mediterranean. You can substitute dried limas, which are nearly as good. This recipe below is the one I developed, inspired by the Good Food one. You can try adding black mission figs and honey, if you like.

zest of one orange

Note: if you can’t find Marcona almonds, toss raw almonds in olive oil, paprika, and salt, and toast at 350˚ for 7-8 minutes, shaking the pan halfway.