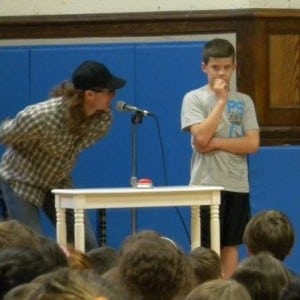 Mr. Harrington’s younger brother answers a question as a challenger stands by

“Mr. Harrington’s Younger Brother” did a masterful job answering questions. He credited his older brother with his success on the social studies questions since he had been a social studies teacher before becoming an administrator. Children in grades kindergarten through five had a wonderful time and administrators showed what good sports they are. There were many debates, especially in the kindergarten classes, as to whether “Mr. Harrington’s Younger Brother” was actually Mr. Harrington in disguise. The Principal’s Challenge was seen as a great way to end a Friday afternoon.