Small village — big insurance bill. That was part of the take-away at their Tuesday (May 27) meeting as trustees for the Village of Cold Spring heard proposals from two companies bidding to handle village insurance needs for 2014-15.

The Spain Agency has been the village insurance agent since 2011 and submitted a bid of $62,654 — a decrease of slightly more than $1,000 from last year. The McKane Group bid $56,392. No decision was reached, in part because Mayor Ralph Falloon and Trustee Stephanie Hawkins were not in attendance. A special meeting of the Village Board was scheduled for May 30 (Thursday) to select the successful bid.

The village insures itself against a wide range of exposure with coverage that deals with everything from general liability, village-owned property, trucks and cars to terrorism, burglary, flooding and public official and law enforcement liability. A new type of coverage has also entered the insurance arena in recent years — cyber security — which covers potential liability against the misuse of private information kept in the municipality’s database.

Tuesday’s presentations highlighted claims against the village in recent years that included damage from falling trees, pedestrian falls on sidewalks and one claim of false arrest.

As he has several times in the past, during the public comment period, PCNR reporter Tim Greco asked if trustees are being kept up to date on the NYSERDA grant. In December 2013, the New York State Energy Research and Development Authority (NYSERDA) approved a $75,000 grant to assist the Village of Cold Spring with the updating of its zoning code. Initially the grant application included numerous conditions that trustees deemed unacceptable. On more than one occasion trustees indicated that if the grant came “with strings attached” they would not accept the funds and NYSERDA subsequently removed all conditions in April of this year.

At Tuesday’s meeting, Village Attorney Mike Liguori once again explained that the NYSERDA application had originally been designed for construction projects rather than zoning updates and that the State agency had accepted all of his revisions to the village submission. “We’re about a month past when we thought we were getting the next draft, (from NYSERDA),” Liguori said, adding that once that document is received, the Village Board can either accept it or suggest further revisions. 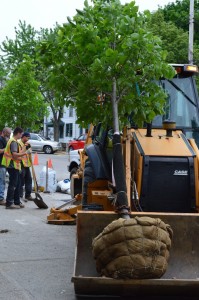 Cold Spring’s Zoning Code, initially adopted in the 1960s, has long been criticized as inappropriate for the village because it was originally written for a suburban community. The grant will be used to bring the Zoning Code in line with the Cold Spring Comprehensive Plan adopted in 2012.

Responding to a question regarding the status of the Tree Advisory Committee, Liguori said he is currently drafting a village law, as requested by Trustee Hawkins, replacing that committee with a Tree Commission. Resident Airinhos Serradas questioned whether proper procedure had been followed, suggesting it was wrong for a single trustee rather than the Village Board to make such a request. Liguori said that was not the case. “No one (trustee) has to wait for the full board to ask me to do a task,” he said. “If it takes all five trustees … nothing would get to the board,” he said. “Someone has to light the fire.”

The Village Board has actually been directly involved with the issue several times beginning in November (2013) when it unanimously passed a resolution creating the Tree Advisory Committee and again in January when it appointed residents to serve on it. In an email to The Paper Hawkins wrote “On April 15th, the Mayor and all Trustees present (Trustee Fadde was absent) responded favorably to the Tree Advisory Committee’s … Tree Management Plan … and creation of a tree board (Commission) to undertake the work of the plan.”

Hawkins said that she then asked Liguori to prepare a draft ordinance on May 8. According to Hawkins the Tree Advisory Committee will review the draft law on June 2 before it goes on to the Village Board. “I fully expect both Tree Advisory Committee and Village Board to have questions and contributions to the development of this ordinance,” she wrote.

Coincidentally, on the day after the meeting, a crew from the Village Highway Department added six new trees along the south side of Main Street between Church and Garden Streets.

Trustees accepted a bid from Frank A. Cook Jr. Inc. to scope a clogged drainage pipe that passes under two private residences located on West Street. Both residents have agreed to pay one third of the cost. Cook’s bid included a maximum $2,000 if a full day’s work is required while Roto-Rooter’s bid was a flat $1,250. Initiating the work depends upon the residents agreeing to pay what could be the higher bid from Cook depending upon how long the work takes. While maintenance of the drain is the residents’ responsibility, village officials agreed to pay the remaining one third of the scoping cost because municipal water drains through the pipe. Trustee Cathryn Fadde emphasized that if the work done by Cook does not alleviate the problem, residents will be responsible for any additional work.

The Village of Nelsonville has been requested to pay the $476 cost of dealing with the leak in letters to Corless in December 2013 and February 2014 but no response has been received. Trustees reviewed the correspondence but took no action.

A resolution introduced by Trustee Michael Bowman was passed requiring village boards and committees to abide by New York State’s Open Meetings Law. Trustees also approved purchase of a Bobcat loader at a cost of $43,010. The multipurpose vehicle will be used for snow removal, street cleaning and other tasks. Majestic Fireworks Inc.’s $9,000 proposal to provide pyrotechnics for this year’s Fourth of July celebration was accepted by trustees. The cost will be covered by a donation.