Haldane’s Theo Henderson finished first in the 3200m in White Plains on May 30, and qualified for the State Championships. Although the 3200m began slowly, Theo pushed the pace when there were 1,000 meters remaining, ensuring his first-place finish in the last two laps. Theo ran the last lap in 63 seconds for a 9:50.28 time in the 3200m. 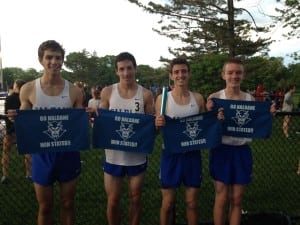 Haldane Varsity Boys’ Track 4×800 relay team is on to states! The qualifying meet was held in White Plains on May 30.

Also finishing first to qualify for States, the boys 4×800 relay team knew every step and every leg of the race counted. Eighth grader Nick Farrell had an excellent performance; Jonathan Clemente matched his personal record (2:04.7). Henderson covered ground to push the team to first place and John Hughes held Haldane ahead of Bronxville’s National Elite runner in the last leg.

The girls also had impressive showings. Eighth grader Abbey Stowell finished second in the pentathlon demonstrating her potential and promise in track. Ruby McEwen finished well in the 1500m (5:25.86) as did Kaitlyn Phillips in the 800m (2:35.9). Adele Westerhuis had a great throw despite the rain and headwinds (73-7). Sarah Warren set her personal record in the 200m (28.18) and 400m (1:04.3).

Haldane Varsity Track travels to Syracuse on June 6, to compete in the Division 2 State meet at 12:30 p.m. at Cicero High School.