But tough loss to Chester ends season in regional semi-finals

The Lady Blue Devils grabbed their fourth consecutive Class C sectional title on May 30 against Alexander Hamilton. The game ended in the bottom of the fifth inning with the mercy rule as Haldane dominated 24-1.

Haldane drove in 13 runs in the first inning allowing Hamilton’s only run. With four in the second, six in the third and one in the fourth, Haldane was unstoppable. Marley Chefalo pitched 16 first-pitch strikes for a total of five strikeouts. Morgan Hotaling had three R.B.I. while Allie Monteleone added three hits and two R.B.I. Chefalo, Missy Lisikatos and Melissa Tringali each contributed two R.B.I.

The Lady Devils advanced to the regional semifinals against Chester (June 5) at Minisink Valley High School but lost a tough game there, 4-1. 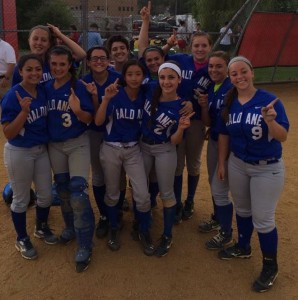 Haldane Varsity Softball turned in a 24-1 victory over Alexander Hamilton in the Class C sectional championship on May 30 at North Rockland High School.