Haldane was victorious in baseball over Tuckahoe on May 31, winning in eight innings to finish 7-3. The Blue Devils claimed the Section 1 Class C title — and improved their winning stretch to three straight titles.

The Blue Devils brought in two runs in the first inning, keeping the lead until the fourth inning when Tuckahoe led 3-2. Two scoreless innings bookmarked Haldane’s run in the sixththat tied the game. The Blue Devils surged in the eighth inning, scoring four runs in a game that echoed the weather. A sunny sky over Provident Bank Park, home of the Rockland Boulders in Pomona, turned cloudy to rain mid-game, with the sun returning to shine down on Haldane in the end.

Senior Jay Marchese pitched five and 2/3 innings before being relieved by senior Johnny Rotando. Marchese struck out one, allowed three hits, four walks, and three runs. Rotando struck out two with no runs allowed to improve to 4-4 on the year. Rotando, voted the game’s MVP, reached base three times and scored three runs.

David Rotando had two crucial sacrifice bunts; one of which moved Johnny to third in the top of the eighth inning. Kenny Doxey and John Parr both had two hits and two R.B.I. John Maldonado had a big hit and R.B.I. and Justin Furdico added two R.B.I. 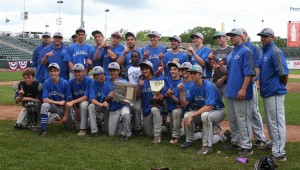