Local firefighters responded to a Friday morning car accident along Route 9D, near Dick’s Castle Road, that left the vehicle burning at the edge of a wooded area. According to the Garrison Volunteer Fire Company, the GVFC and the Continental Village Fire Department participated in the emergency action with the Cold Spring Fire Company No. 1. After the incident, the GVFC reported that the “driver was OK and the scene was cleared quickly.” 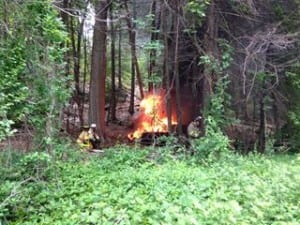 Firefighters respond to a blaze in a car after an accident on Friday (June 6) along Route 9D in Garrison.
Photo courtesy of
Langley-Garrison Volunteer Fire Company

This story has been updated from an earlier version.