Garrison resident and active Philipstown Democrat Lithgow Osborne has decided to run for the office of Putnam County Clerk. Osborne, expected to formally announce at a Democratic fundraiser on Sunday, June 8, will gather petition signatures to run on the Democratic line. He will run in the November election against the current First Deputy County Clerk, Michael C. Bartolotti, a Republican and career civil servant. Both candidates already have the support of their respective county committees. 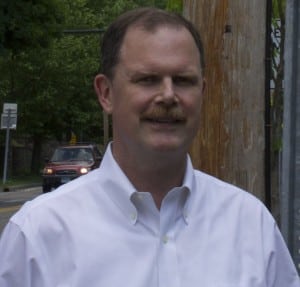 In Putnam the duties of the County Clerk’s office include the role of registrar or county record keeper as well as clerk of the county courts. Almost any transaction or event connected to the county is recorded and stored with the clerk’s office. The incumbent Clerk, Dennis J. Sant, is retiring after 13 years as clerk and 24 years as first deputy in office.

In an interview with The Paper, Osborne, 55, said he was running because he believes he is well suited to the duties of the office and thinks he could bring some innovative approaches to the way the office served the public.

“I am dogged in my determination to get things right. There’s a great dignity in doing your job correctly,” Osborne said as he described a business career that has included running several businesses either on his own or for others in the related fields of interior design, commercial and residential real estate and high-end antiques dealing. “Every one of those jobs has had something in common. And the commonality was it was a job that required me to do a lot of focused, concentrated research, attention to detail seeing jobs through to the end,” he said.

Asked what he would seek to change in the clerk’s office were he elected, Osborne put technological advancement at the head of the list. “I would focus on the clerk’s presence on the county website. If you try to navigate your way through the website it seems cheery and informative but once you start getting in there, it’s really a mess,” he said. “It seems to be designed without thinking about who’s using the website.”

Osborne argued that the current site creates a layer of confusion and separation between the government and the taxpayer, which he would seek to dissolve by making much more information available digitally.

“If you cannot use a computer and find things you need in the same day, there’s a problem,” he said. Emphasizing best practices for website design and operation he noted: “The best websites lead you intuitively to find what you need.”

To support businesses in particular Osborne said he would look to create far more opportunity to file needed paperwork directly online, which he observed is the case in Westchester County. He said requiring use of regular mail or faxes created obstacles in today’s business environment.

To further engage the public and assist businesses, Osborne would create satellite office services around the county. Rather than trying to build permanent locations, which would be prohibitively expensive, his idea is to locate personnel on a rotating schedule in borrowed local government space. “Except for people in Carmel everyone else has to allocate the time in the day needed to drive to the office there,” he said.

Osborne, who is married to husband Chuck Burleigh, has lived in Garrison for four years and before that for eight years in Kent Cliffs. A native of Auburn, New York, in the Finger Lakes region, he lays claim to a long line of familial civic duty, including a relative who served as clerk of Auburn. He currently serves on the board of the Osborne Association, which for many years has offered services to state prisoners and their families to encourage positive reintegration into society. He is also the treasurer of the Philipstown Democratic Committee.

Facing an uphill race given the larger Republican voter numbers in Putnam County, Osborne expresses optimism. He said he has received an enthusiastic response from Democrats in the eastern side of the county and he believes there is a sufficient number of registered independents and independent-minded voters for him to win.

“The time is right for a fresh perspective. I will bring an organized, professional business background to the job. I know I’ll be good at it,” he said.