Students sample workshops conducted by local artists of all stripes

By Alison Rooney and Michelle McEwen

That Philipstown is home to a large number of professionals with lengthy resumes in the arts was demonstrated in the halls of Haldane last week. More than 15 of them shared their expertise with the entire fifth-grade class in a new, full-day initiative devoted to a wide range of art forms.

Former art director for Nickelodeon, check; documentary filmmaker whose work has been on the Academy Awards documentary shortlist, check; actress/singer who has appeared on Broadway, check; director of operations for a top digital printing studio, which regularly works with high-end fashion designers, check; Sarah Lawrence professor and multi-volumed poet, check — and that’s less than half of the day’s instructors.

Haldane Arts Booster Club President Katie Bissinger described the response from the local arts community as “phenomenal — a rush of volunteers.” All were eager, in the words of Haldane Elementary Principal Brent Harrington, to “celebrate the arts and plant a seed for future passion. We have such a rich resource in the community with so many talented individuals; we were lucky to get a healthy spectrum of them to share with us today.”

Share they did, as the workshops took place on several levels of the building, with groups of students moving excitedly between the disciplines. The day was divided into three sessions, each with a choice of five separate workshops. Students were given a list of all and asked to note their top three choices, and organizers did their best to provide each child with at least one. As the day was also designed to expose students to forms they might not have even been aware of before, sometimes not getting a top choice worked out even better.

Philipstown.info sampled portions of quite a few of the workshops, which varied from quiet, focused instruction to looser, physically-oriented sessions. A few observations:

In their Drawing 1.0 class, Steve and Mary Bates set out an overview, replete with goals and an “After the Workshop, Try This at Home …” follow-up. After equipping students with paper and various drawing implements, and setting up a still life of various objects, they told the students they would be working on four different kinds of drawing, described as “ways of seeing.” Steve Bates made a comparison to Sherlock Holmes and Dr. Watson, noting that when Holmes said to Watson “How did you see that? You see but you don’t observe” what was meant was “Focus, perception, not just seeing.”

Mary Bates then described the first exercise, blind contour drawing, as “working with lines and with shapes, volume, depth and tone. Keep your eyes on the still life,” she instructed. “Don’t look at your paper and don’t take your pencil off the paper. You’re training your eye to see what is here rather than what you think is here.” Steve Bates added, “In that silliness you’re going to catch one or two really interesting details.” Work in other forms followed.

Next door, Room 216 resembled a film set, because it actually became one, as Ivy Meeropol, assisted by sound man Nick Pohulchuk, and still photographer Rudolf Van Dommele led the fifth graders in making a film documenting Haldane’s history, starting first with an interview with Philipstown historian and (very) long-term resident Donald MacDonald, who attended Haldane for two years, from 1940 to ’42 prior to his service in the Navy during World War II.

As the preliminary set-up was taking place, Meeropol had some advice for the student interviewers:

We take great pains in documentaries to hide our microphones. You want to feel that everything is natural. We use the boom mike for back-up and ambient sound … What you want to do is come up with a way of asking the questions so that the person doesn’t just say yes or no — you want to draw out that person … I find the best ways to get the answers is to have a conversation. Don’t just be thinking of your next question — really listen to the answers and be interested in them.

As several students peppered MacDonald with questions pertaining to Haldane’s earliest years MacDonald provided answers when he knew them, including where the money to construct Haldane came from (the iron industry). 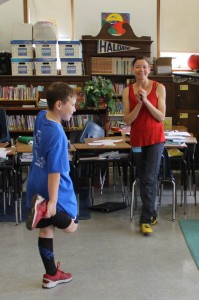 Across the hall, it was livelier still in the Hip Hop Choreography room presided over by Katie Bissinger. Some guys versus girls battle action was going on, in dancing form, as Bissinger told the group of the importance of patterns in this dance form. She asked each “side” what they “didn’t like” about the other side and received a truthful answer from one girl about the guys: “I didn’t like that they were so good.”

Meanwhile, a more “home girl” professional, middle and high school librarian Juli Hoffman, who had showcased her acrobatic talents at the high school talent show this April, led a group of nine students in the Aerial and Circus Arts workshop. As the kids warmed up and tried to emulate Hoffman’s perfect split, the librarian explained the history of the circus, in particular the significance the Cirque du Soleil has had in revolutionizing circus arts with the introduction of acrobats and aerialists.

After stretching, the students divided into small groups to rotate around four stations: juggling, stilts, a video of an aerialist performance, and the main activity every kid was just dying to try — the silks. Two purple silk sashes hung from a support structure 10 feet in the air. On the silks, under Hoffman’s guidance and supervision, each of the students learned how to hang upside down, lie suspended in midair, and leap around in a circle floating successfully.

The next rotation saw workshops in creative writing with Kathy Curto; The Art of Breath in Song, in which opera singer and singing teacher Linda Milne Speziale worked on specific breathing techniques, explaining them anatomically; and drama with Jenn Lee where kids learned how to respond to directorial instruction by making “adjustments” in characterizations: “I want huge, actor-y, big, big choices, really clear ones,” she told the group.

At a textile design class Dani Locastro had each student create a small patterned “motif” which she then collected into a mosaic of sorts. Post-workshop, she would be taking this to her office, and using one of their digital textile printers to turn it into fabric; each contributor would then be given a swatch. The realities of the profession were addressed as Locastro urged the group along. “When you’re designing on Seventh Avenue and you’re going to make a product that’s going into the market, speed is of the essence,” Locastro said.

Explaining the profession itself she said, “My job as a textile designer is to take what we’ve done and say ‘Can we do this with different color combinations, on different fabrics?’”

Locastro wowed the kids when she pulled out a large, vivid piece of fabric, which had been designed by her office and used as a costume in an earlier Spiderman film. She described how she and her work-mates had been “sworn to secrecy” when designing them so that the surprise of the visuals could be concealed until the film’s release.

The third round included more creative writing, this time with Jeffrey McDaniel, Singing and Movement with Laura Danilov, Collage with Adam Osterfeld and Modern Dance with Kacie Chang Grossman, in which one boy entered the room saying “I didn’t sign up for this class” but mere minutes later he was participating with interest as she had the group “work with the way effort shapes everyday movement” initially walking and crossing in different manners, then adding pauses, stillness and gestures.

In the Band Room, student musicians were truly banging on a can, with a can and all sorts of other found objects, including milk containers and a little red wagon in “Haldane’s Lost and Found Orchestra” led by Greg Smith, who anchored it with his French horn and Eric Starr. Percussive, kinetic rhythms abounded and eventually they did a bang-up version of The Lion Sleeps Tonight.

The instructors appeared to be getting as much out of it as the kids. Locastro, who not only taught a workshop but participated in another, called it “Definitely liberating to try new things and not have the boundaries of preconceived ideas. They’ve never heard of half this stuff and while initially there was some of that ‘What is it? It might be weird’ going on, they relaxed as it went on … Collectively, art, performance, whatever, they get that it’s not always about the result but about the essence of self, and that’s powerful. It’s the letting go — it’s key.”

It is hoped that this day will become an annual fixture at Haldane.

Photos by A. Rooney (except noted)