What happens when A Midsummer Night’s Dream meets The Jersey Shore? MTV and Shakespeare collide in the upcoming Haldane Middle School Drama Department’s production of the comedy Midsummer/Jersey by Ken Ludwig (the talented playwright who wrote Crazy for You, among other works).

A play chosen by the director, Martha Mechalakos, for its unique blend of the classic and the contemporary, Midsummer/Jersey sets Shakespeare’s play on the boardwalk of a seaside town in modern-day New Jersey.Hermia, Lysander, Demetrius, and Helena become Mia, Lyle, Dennis, and Helene. The Duke of Athens, Theseus, turns into the young and hip Governor of New Jersey, Chris; the rustics metamorphose into gabby beauticians; and of course, everyone speaks in a Jersey accent. 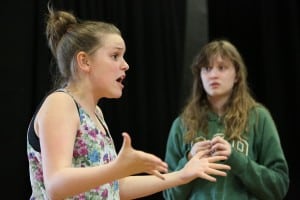 The story begins when Mia and Lyle become stars of a reality TV show and flash back six years to recount the events that led up to their wedding. As the play unfolds, the plot revolves around the imminent marriage of the Governor of New Jersey, the sandy love affairs of four high school crushes, a colorful crew of fairies, and the stylists of the local beauty salon. Magic transforms the night when the mischievous Oberon and Puck make their entrance with a powerful love potion that will devastate several weddings and the acting careers of six stylists — unless true love can ride out the wave.

For those who love Shakespeare, Mechalakos assures that the playwright follows the original work “pretty closely act by act, scene by scene, and a lot of the time, speech by speech.” The entire play is written in verse for a seamless script. For those who love the modern twist, Mechalakos continues, “the playwright left explicit instructions to keep it very current, so there are a lot of contemporary references.”

Such hilarities await the audience as Puck obsesses over his iPhone, Oberon plays an electric guitar on the beach, and the wild, spiky-haired fairies dance to the 2014 hit Happy by Pharrell Williams. Parodying Shakespeare while jesting pop culture, this romantic romp makes the timeless timely.

About 50 students auditioned for the production as one of the largest casting pools ever witnessed at Haldane’s Middle School, a testament to the building success of the drama program. Commenting on the department’s progress, Mechalakos asserts:

It seems like every year, things just get better. We learn with every season that we do. I think that it doesn’t matter if it’s drama, music, or sports — when you establish levels of excellence, more people want to be involved, and when more people are involved, you have a bigger pool to make selections from. Even that in itself begets a superior product. It’s been steady progress … we just keep trying to raise the bar.

Based on this upward trend, it looks as if this new production will be one of Haldane Middle School’s finest yet. Freya Wood-Gallagher, who plays Nikki Bottom, enthuses that “it’s a really funny play with a lot of modern day jokes,” while Mollie Altucher praises “it’s cool because it’s a spoof off of Shakespeare’s play.”

Mechalakos encourages the community to “Come see the show! It’s going to be a lot of fun. Midsummer Night’s Dream is just a fabulous play, and for those who may be a little intimidated by seeing Shakespeare, this is the next best thing.”

Haldane Drama will perform Midsummer/Jersey at 7 p.m. Friday and Saturday, June 13 and 14, in the Haldane School Auditorium. Tickets will be sold at the door for $12 for the general public, and for $5 for students and seniors.