Storm-water issues made Philipstown’s Town Board meeting stormy at times Thursday (June 5), as residents raised concerns about adherence to federal laws, in one instance, and deluges of water on a country lane, in another. But the town government also drew praise for its storm-water efforts.

The issue first came up at the meeting, the board’s formal monthly session, when Supervisor Richard Shea discussed ongoing run-off in Continental Village. The affected area lies below Upland Drive, near the southern-most stretch of Old Albany Post Road, whose tip got paved last summer. A small stream there once flowed into Sprout Brook, but after the road work it got “clogged with our material” and now courses through an elderly couple’s back yard, Shea said. “We need to get in there and clean it out. We really are responsible.” However, the New York State Department of Environmental Conservation must grant permission. After two visits by DEC and town officials to the site, Shea expressed optimism the work can occur this summer. 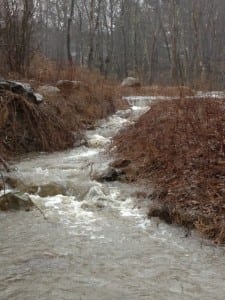 During the public comment period, Gabriel and Kathleen Kourie sought help for inundation along Upland Drive, a private dirt road intersecting with Old Albany Post Road. They attributed the flooding in part to run-off from nearby Old West Point Road.

Upland Drive “is atrocious,” Gabriel Kourie said. “The water that comes off West Point Road when we have a storm looks like a waterfall. It’s a 30-feet-wide stream. I think you should have to have some responsibility to help us out,” Kourie said. “I know it’s a private road, but it’s not our water” and instead is “water directed by the town over Upland Drive,” he claimed. Overall, the situation “is outrageous. It’s just not right,” he said.

Shea emphasized that “the town cannot go on a private road.” He also cited attempts over the years to gain easements on private land and take other measures. He observed that one resident declines to join with neighbors or the town government in implementing a solution. “He has private property. He doesn’t want anybody on it,” even to fix a common water problem, Shea said.

Councilor Nancy Montgomery recalled that she, too, had attempted to get all the residents to cooperate, to no avail. She also pointed out that geographically “it’s a difficult spot. You’ve got three hillsides going into a funnel.”

Shea said the town has undertaken some remediation and drafted plans for more “to redirect the drainage that comes off West Point [Road]. But these are big projects.” He promised to confer with Philipstown Highway Superintendent Roger Chirico. “Private roads are not the town’s responsibility. The town having an impact on a private road because of water from our [public] road is,” Shea said. “So we will see if there’s a way we can work something out.” But without agreement among the neighbors on a comprehensive solution, the town role remains limited, he cautioned.

Philipstown resident Russ Cusick complained to the board both about alleged town lapses in complying with laws on storm-water management and about having been listed on the meeting agenda as a speaker and then removed after Shea objected. 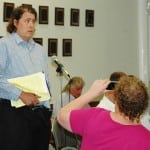 As a friend records the moment, Russ Cusick tells the Town Board of his storm-water concerns.
Photo by L.S. Armstrong

Cusick maintained that a Philipstown storm-water meeting “is required every year by federal law. When was the last time we had one?” He said he had requested that the town clerk put him on the agenda so he could tell the board about “our federal storm-water mandate” and “share with you my concerns.”

Board members replied that Cusick had been included on an agenda version distributed without Shea’s approval. “It didn’t go to the supervisor” for authorization. “It should have,” Councilor Dave Merandy said.

Shea explained that “when we have a serious issue” raised, the board wants materials in advance, to obtain “some idea of the scope and scale” of the intended discussion. “I didn’t get anything from you or the clerk,” he informed Cusick. “We’re not saying that you can’t be on the agenda” but that board members want questions and other background beforehand. “I think it would be a lot more productive” that way, he said.

“Is it required for residents of Philipstown, taxpayers, to send documentation?” Cusick asked. “Is that required in a democracy? What is required of our elected and appointed officials is to be knowledgeable of our federal laws.”

Shea noted that town committees, such as the Conservation Board, devote numerous meetings to storm-water and environmental topics, with the building and wetlands inspectors likewise heavily involved. “We do not shirk our responsibilities in regard to enforcement of laws,” he said.

Cusick pledged to return. “I absolutely will be on [the agenda] next month,” he predicted. Meanwhile, he wants Shea’s written reasons for excluding him from June 5’s agenda. “You’ve not done, for me, a sufficient job of explaining that,” he said.

Yet another resident who had mentioned storm-water concerns previously also appeared Thursday — bringing not a problem but expressions of gratitude. Robert Juby commended the Philipstown Highway Department for upgrading a culvert, ending ongoing water build-up from intense rain on East Mountain Road South. “We’ve had some really pretty heavy storms since” the work “and you wouldn’t even know we’d had a storm there. So it’s 100 percent” better, Juby reported.