This past March 1, the world grew a bit brighter for Beacon’s cheese and charcuterie enthusiasts. Beacon Pantry (BP), which specializes in just those things — along with an array of baked goods, condiments and specialty food items — opened on a bustling Main Street corner just across from Max’s.

“We’re trying to fill a void in Beacon, to the extent possible in a small space,” BP owner Stacey Penlon said. “We surveyed many people and what they seemed to miss is specialty foods — sort of what to serve at 5 p.m. on a Saturday — things one might have had to make a run to Adams to get a hold of.”

Penlon’s devotion to cheese has increased since she decided to choose it as her store’s framework. “It’s become more of a passion during the past year,” she says. “It’s amazing how something as ordinary as milk can make so many hundreds of varieties of cheese and these are so wildly different.”

The cheese case stocks 40 to 50 varieties: the vast majority cut to order and testable. Silver stickers on products throughout the store indicate that a taste may be requested. “I’m a firm believer in try-before-you-buy … the fact that I cut to order makes it approachable — just ask for four dollars’ worth and it’s fine. My philosophy is ‘buy less, more often’ and don’t let cheese turn into a science project in your fridge,” Penlon says. 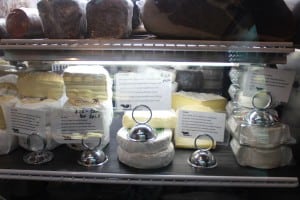 A corner of the cheese and charcuterie case at Beacon Pantry, with lengthy descriptions of each variety.

Relying on a couple of distributors, she carries an array of international and local cheeses. “When I first opened, the vast majority of my cheeses were domestic, but in response to customer demand it’s now about 50-50 … I try to find products not available elsewhere which are the best in the category. If a product is in the store, I endorse it and it’s unique. BP also offers cheese education classes, which touch upon ‘Why it is what it is’ … how to taste it and beyond.”

A “Cheese of the Month” is always on offer. In April it was a rarity: “Puits D’Astier which Penlon calls “ugly, doughnut-shaped. We got 13 pounds of it and sold it all in less than two weeks.” In May, the focus was on cheeses made by women-owned creameries, in honor of Mother’s Day.

Another niche market is French products to oblige a large French population living nearby. But not, as Penlon calls them, “hifalutin fancy-pants products, but good, solid French staples” — supermarket products, like Teissiere sodas, which send French expats into rapture, and BN cookies — “A woman came in and hugged them,” recalls Penlon. Their bread products come from Hudson’s Café Le Perche.

“They make the best pastries and breads in their wood-fired oven which they brought over from France,” Penlon says. Italy isn’t neglected, as Penlon lived there for several years and “knew it would be a strong presence in the store.” Penlon also sings praises of the coffee she serves: Stumptown — “roasted the day before it’s brought to us.” 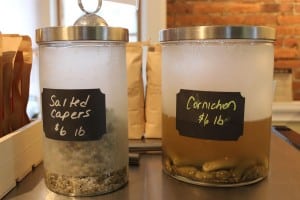 A counterful of condiments at Beacon Pantry.

BP participates in Second Saturdays, staying open with crowds, and plans are afoot to hopefully join forces with The Hop and Artisan Wines for a combination cheese plus wine versus beer comparison night. In addition, BP caters — assembling platters and packing small crates with their goods. With no kitchen, they don’t cook and are limited to selling what’s on hand, which translates into a couple of types of sandwiches each day, for example prosciutto and fresh mozzarella.

“The meats have never been frozen,” says Penlon. “We get them in on Thursdays and put any leftovers in our freezer after the weekend. Same goes for fish.”

They take pre-orders and purchase fish from Sally’s Fish Market in Newburgh every Thursday, selling extras, trying to stock just enough to sell out. Occasionally salmon remains left over, which makes it to their freezer for a later sale.

Penlon and her family came to Beacon from Westchester eight years ago looking for a “non-suburban area, a real community, with proximity to nature and to the city and diversity — it’s perfect.”

She spent 15 years in finance, working in client service, before getting laid off last October. While interviewing for a new position and considering the continuation of the 130-mile commute, Penlon decided, last December, that she had had enough. It was the moment to make a big change.

Welcome to the neighborhood 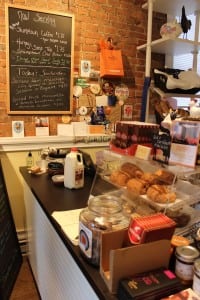 Grab a croissant, coffee, or chocolate at the Beacon Pantry counter.

“I had had these ideas in my head, but it was always a dream, then, all of a sudden this space became available. I saw it and thought ‘that’s it’. The location near Key Food was a huge benefit because people can shop there and then buy specialty things here,” she said. “And it’s a great corner, with Max’s and Alps [chocolates] nearby. And we’ve felt very much welcomed by everyone.”

Though a babe in the storeowner woods, Penlon’s background has served her well as she’s logged excellent early results.

“Things have gone smoothly; my attention to detail, ability to plan and financial background have come in handy and my client service background is crucial,” Penlon said. “I will try my best to fulfill making sandwiches at 8 a.m. or to get an esoteric product that someone asks for.”

What’s been most challenging is typical: the perishable aspect — knowing how much to order, minimizing waste. As with many new business owners, the hours are punishing, but essential, according to Penlon:

We’re open from 7 a.m. to 8 p.m. six days a week, and from 7 a.m. to 6 p.m. on the seventh, and some of the busiest times are late in the day, with people coming home from work, looking for something for dinner. Because of this we make sure to stock day-to-day products: pasta, bread, so that you can compose a dinner. It’s fulfilling but hard. But it’s crucial that we stick with the hours we’ve set, and we’ll keep those hours for at least a year before we do any tweaking.

This was brought home for Penlon on a slow Tuesday, when it had been dead for hours and she was thinking of closing 15 minutes early. At 7:50 p.m. a customer came in and asked for some prosciutto for that night’s dinner. “If I’d left she’d have been disappointed,” Penlon says. “Once someone thinks you are flaky, they won’t return. If you’re going to sell things it’s kind of good to be open!”