By and large, I am what is known in the marketing world as an Opinion Leader when it comes to my family’s eating habits. I decide what is good, and my family decides to like it. (Though, to be sure, this process hits the occasional snag.) But grits are a different story. My husband, Peter, is a genuine southerner, raised in Spartanburg, South Carolina, by a Charleston-old-family mother and a very-happily-transplanted father. And he eats grits.

He eats grits, our three children eat grits, and now I eat grits, too, having been won over by their enthusiasm for this eminent corn porridge. 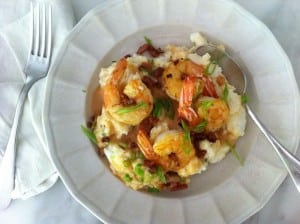 It wasn’t that I’d never encountered grits before. Growing up in Indiana (which is quasi-Southern by temperament, if not by geography) grits were around, but to me they were a novelty food, like hush puppies — not something you’d make every day. But then I met Peter. In the 17 years since our fates entangled, his go-to homemade weekend breakfast has included a large pot of grits to go with the scrambled eggs and bacon.

At the table, he fills his plate with grits, then crumbles his bacon over it, along with some grated cheddar cheese. Then he mixes in the scrambled eggs, too, creating a plateful of chaos the sight of which used to make me shudder. For many years, I ate my scrambled eggs on toast, properly, with a dainty little dollop of grits as accompaniment. When the kids came along, they chose, for some confounding reason, to follow Peter’s lead, not mine. Eventually, I gave in. What choice did I have? And I have not gone back.

We don’t even make toast on these mornings anymore.

Yet while Peter and I are now very nearly on the same page with regards to grits (our only difference being that he will eat the Quaker brand and I will not), quarrels continue to rage throughout the grits-loving world. These mostly have to do with nomenclature — though grits are called “hominy” in parts of the South, many food historians argue that true grits are not made from actual hominy, but rather from plain dried corn. Moreover, some people blur the distinction between grits and polenta. The difference is real, but irrelevant, unless your corn is ground with a millstone.

As for me, I am an open-hearted, diversity-embracing kind of gal these days when it comes to grits. Not least because grits themselves have been getting better and better, part of this country’s broader movement towards heirloom foods and artisanal practices. Grits are traditionally made from dent or flint corn — which is to say, corn varieties that are suited for drying rather than eating as a vegetable. (In the United States, less than one-half of one percent of the acres devoted to corn are used to grow sweet corn, the kind you eat on the cob; the rest is field corn, used to feed animals, make ethanol, and produce things like corn oil, corn starch, and Doritos.) In recent years, many Southern producers have started growing traditional dent and flint varieties and cold-grinding them to make grits with real bite and flavor.

And still the wars rage! Purists say that the only truly respectful way to serve such grits is cooked with cream and topped with butter. But I’ve had grits topped with shrimp and gravy many times since meeting Peter, and if there is a finer way to serve grits, I do not know it. Indeed, made well, it is one of the most delicious dinners I know.

Dinner? Wait a minute! I’m told that shrimp and grits is a breakfast dish, and should always only and ever be a breakfast dish, since it was first served to shrimpers in the mornings before they headed out onto the waters.

To which I say: Oh be quiet and eat. And trust me: You will like it.

Make the shrimp stock first — unless you’re short on time, in which case you can substitute equal parts chicken stock and beer (but it won’t be quite as good).

3 cups water, plus more as needed

For the shrimp broth

One thought on “Mouths to Feed: Gritlock”