Although I visited too late in the spring to catch the fragrance and beauty of the tree peonies, Deborah Little and Rebecca Sperling’s garden was still full of color. The Cold Spring residents have a staggered bloom time for their flowers throughout the spring that gives them gorgeous color for several months, including iris, hydrangea, and rhododendron. In the summer, they look forward to the blooming of the dahlias and sunflowers.

A chipmunk, a new visitor to their yard, accompanied us on our tour of their garden on a bright sunny morning. Birds — this spring a favorite sighting was a red-breasted grosbeak — enjoy the foliage, several feeders and two wren houses. In a small pond in the back, a few frogs hang out, always named Sebastian. Sperling reads about plants to attract birds but says, “Then I forget what the name of it was. I just know what they look like and how to take care of them.” 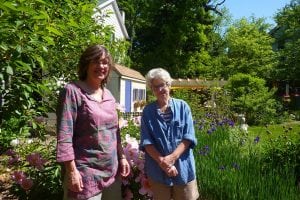 From left, Deborah Little and Rebecca Sperling have created a lovely outdoor space in their yard in the village, full of flowers, fruit trees and vegetables. (Photo by P. Doan)

A landscaper owned the house before them and when they bought it 11 years ago many of the multiple varieties of peonies were there. They’ve added a pond, a vegetable garden, a container garden and several trees. A river birch they planted three years ago for privacy has added textural visual interest in the back corner and now needs to be pruned for the spot.

Their landscape has multiple areas for entertaining and enjoying the outdoors. “The house is very small and three seasons of the year, we’re out here,” Little said. Sperling added, “Each of these areas are really like rooms.” As any good gardener does, they steal ideas from the inspiration of other gardens they’ve seen. Some friends in Brooklyn and a trip to Italy gave them the idea for a section on the side where they’ve got a lovely assortment of large planters, including a magnolia, grasses, a Japanese maple, a fragrant bush no one could recall the name of, and blueberries.

A foundation from a second structure that was torn down became the platform for a seating area they covered with a pergola over a large dining table. Little said that they started screening movies out there, too, with a projector and a sheet. It’s been used as a dance floor for parties and celebrations.

An arbor that’s built over a spot where they can park a car has old grape vines that precede them, too. “We’ve put in a few replacements for some that died, but we’ve given grapes to a neighbor who made wine from them. Every little area has some story.” A dogwood tree they believe dates back to when the house was first built more than 100 years ago was the first focal point they used to create an outdoor entertaining area. “It’s about 10 degrees cooler under there,” Sperling said.

They describe their yard as a constantly shifting and evolving experience. “We aren’t very methodical about it. We have a few nurseries we love to go to and we walk around and it’s whatever grabs us,” Little said. Sperling added that she was more conservative about color, but now feels, “bright is pretty and now I’ll put anything in.”

Mistakes can be made. Sometimes a planting becomes bigger than expected and needs to be pruned or moved. “We don’t follow the rules,” Little said. “We enjoyed the blueberries so we added a peach tree, a sour cherry tree, and a pear tree.” Now they feel like the peach tree is too large for the front and are trying to figure out what to do with it. The fruit is a source for summer pies.

Very little of the landscape is devoted to lawn. “The goal was to have no grass. We only have a little in front and we’re thinking of getting rid of it,” Little said. “You’re always imagining the next thing you’ll do,” added Sperling.

They’ve chosen to go with a natural approach to gardening and don’t use pesticides, herbicides or chemical fertilizers in their landscape. Sperling described being late to get to the train because she stops to pick aphids from the roses in the morning. Mulch helps keep the weeds down. They’re considering where to put a compost bin, which would be a great way to reuse the natural resources their garden generates.

“There are all these gifts in the garden and you feel a sense of responsibility for taking care of it all,” Sperling said. They both commute for work in the city and expressed their joy in having a peaceful, beautiful landscape to come home to in the evening and on weekends.

Little said that she’s gardened her whole life and Sperling described her experience as more limited. They missed gardening and it was a motivating reason for moving to Cold Spring. “It’s the only time I don’t think about anything else,” said Little. “You can do something and if it doesn’t work you can try again next year.” The couple’s experience and enjoyment of their landscape is obvious and their approach is an inspiration for anyone wanting to figure out how to begin. Just get started, don’t be afraid to make mistakes, and above all, take time to enjoy your efforts.

2 thoughts on “Roots and Shoots: Coming Home to Their Garden”