Co-director and writer Daniel A. Miller will answer questions

Depot Docs brings it all back home on Friday, June 20, for the final screening of the 2013-2014 season, when Garrison Landing’s own Ironbound Films comes calling at the Philipstown Depot Theatre with their up-close and painfully personal bio-doc of trash television’s rabble-rousing, briefly bankable bad boy, Evocateur: The Morton Downey Jr. Movie. 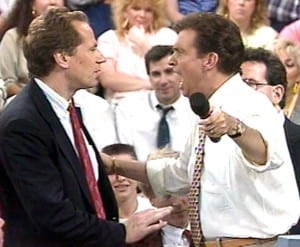 You remember Downey — the sneering, chain-smoking host of a TV talk show out of Secaucus, New Jersey, whose brand of rude, crude, take-no-prisoners verbal (and sometimes physical) assaults on guests — political and social-change types from both the right and the left — aided and abetted by a raucous audience of screamers he called “the beast,” became a national phenomenon in 1988.

The film follows the arc of Downey Jr.’s life, from growing up surrounded by pop-culture show biz royalty — his father, Downey Sr., was a well-known radio crooner; his mother, Barbara, was a singer and dancer, one of the Bennet sisters, and the Kennedys were family friends — to early work around the country as a radio announcer, and negligible success as a singer-songwriter. In the early 1980s, he was host of a radio talk show in Sacramento, California, where he seems to have developed his loudly “populist” and famously abrasive shtick, channeling blue-collar, working-class resentment. His inability to keep his act, and his arrogance, in check eventually got him fired — he was replaced by Rush Limbaugh!

The TV show, after making an initial, very large splash in the metro area in the fall of 1987, moved to national syndication in early 1988. Over the next year, what began as a surprise cultural and entertainment phenomenon (and a harbinger of things to come in politics and the media) became an increasingly bizarre circus, not least because of Downey’s involvement with the Rev. Al Sharpton and the Tawana Brawley scandal.

In April of 1989, Downey claimed to have been attacked by Nazi skinheads at the San Francisco airport, which turned out to be an attention and publicity-grabbing stunt. Downey’s many personal pathologies, harnessed to the creation of his talk show host identity, had taken on a life of their own, were clearly out of control, and no longer so bankable. Not long after, the film and television critic for the Washington Post asked: “Suppose a maniac got hold of a talk show. Or need we suppose?” The show was cancelled.

Ironbound Films’ principals, Seth Kramer, Daniel A. Miller, and Jeremy Newberger, not only co-produced and co-directed, but are credited for editing and cinematography (Kramer), art direction (Newberger), and writing (Miller). Newberger is seen in a home movie parody of the Downey show made when he was a teen fan — as were Miller and Kramer — and Miller gets cast-listed as Lips, a live depiction of Downey’s “loudmouth” logo. In addition to all of the above, they’ve assembled a brilliant collection of archival clips, interviewed many of the players and not-so-innocent bystanders, and used clever anime sequences to help tell the tale. And a whale of a tale it is.

Evocateur: The Morton Downey Movie, will be shown at the Philipstown Depot Theatre, Garrison’s Landing, on Friday, June 20, at 7:30 p.m. Co-director and writer Miller will be present for a post-screening Q-and-A and a Depot Docs reception. For more information call 845-424-3900 or go to philipstowndepottheatre.org. For tickets (recommended) go to brownpapertickets.com.