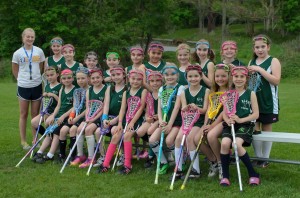 Philipstown Lacrosse Association for Youth (PLAY) celebrated a successful season after fielding their first girls team with an ice cream party on June 6. Twenty-one girls, grades two to four, played seven games and one tournament during a season that ran from late March to early June.

Karen Nelson, one of two program founders along with Carol O’Reilly, explained that girls and boys LAX are quite different games. For instance, girls are not allowed to check or have any physical contact until U13. Due to these more restrictive rules there is less protective equipment required; girls wear goggles and mouthpieces and can opt to wear gloves.

Nelson and O’Reilly held a skills clinic last winter that was attended by eight girls and subsequently announced the formation of a third- and fourth-grade team allowing any second graders to play up. They hung their hopes on “if you build it, they will come” since five second-grade girls had played on the boys team during the 2013 season. PLAY is optimistic they can expand the girls program further for the 2015 season.

The girls play local teams — none farther than 30 minutes away — and are at home on the Garrison School field. Coach Molly Freeman is a young Garrison local who played on Boys PLAY teams for many years. Boys PLAY has been operational for 18 years under Director Tim Donovan. LAX is a great cross-training sport that builds team sportsmanship, endurance, agility and motor coordination. PLAY places emphasis on skills and team building over scores.

Any questions about Girls PLAY can be directed to Karen Nelson at [email protected].