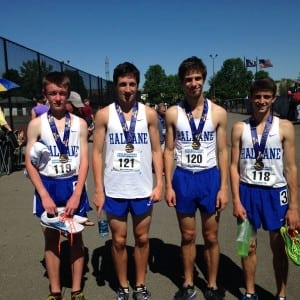 The Varsity Softball Lady Blue Devils ended their season on June 5 with a 4-1 loss to Chester at Minisink Valley High School in the Class C regional semifinals. After two runs by Chester and one by Haldane in the first inning, the game went scoreless until the seventh inning when Chester added two more. Haldane’s Maisy Curto delivered the big hit of the game with a triple with two outs in the seventh inning.

“The guys have a lot to be proud of as they played their hearts out and came up a little short of going to States,” Virgadamo said.

Haldane Boys Varsity Track travelled to the Division II State Meet at Cicero-North Syracuse High School on June 6 and 7 to compete in two events. Track, unlike other sports, does not follow the Class A-B-C system at States and therefore Haldane competed against many larger schools. Theo Henderson finished sixth in the 3200m and the relay team comprised of eighth grader Nick Farrell, eleventh grader Jonathan Clemente, tenth grader Theo Henderson, and senior John Hughes finished fifth in the 4×800-meter relay. Hughes ensured that place by passing another team in the last 100 meters.