Stephanie Haviland was awarded the Bachelor of Science degree in visual arts at commencement exercises held Friday May 16, for the 2014 graduating class of Purchase College. The Cold Spring resident and 2010 Haldane graduate was one of over 1,000 students celebrating their graduation at the Westchester County Center. Stephanie served an internship at New York’s Metropolitan Museum of Art in 2011, and travelled in 2013 to Florence, Italy, to paint under the tutelage of Andrew Lattimore. She plans to curate and show her art at galleries in New York City in the year ahead. 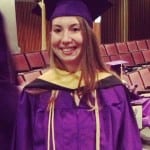 John Cronin and Sophia Ortega, of Cold Spring, graduated from the Oakwood Friends School in Poughkeepsie, on Friday, June 13. Cronin and Ortega have been at Oakwood Friends since sixth grade. The students are among a graduating class of 31. 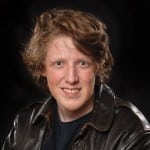 Oakwood Friends School, founded in 1796, is an independent, coeducational, college preparatory day and boarding school serving grades six through 12. Guided by Quaker values, Oakwood Friends educates and strengthens young people for, as they state, “lives of conscience, compassion and accomplishment. It fosters a diverse community of students and staff in an atmosphere of mutual respect and enrichment, sensitive to the world and its needs.”

Commencement at Oakwood Friends is different than at most area schools. The night before, there is a senior class dinner with faculty, friends and family. After the dinner, all go to a candlelit meeting for worship where some participants, after silent contemplation, are moved to speak extemporaneously. 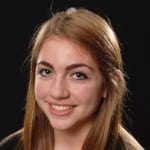 All students, not just seniors, attend graduation the next morning, held outdoors, under a sprawling copper beach tree on school grounds. After family and friends find chairs, students from sixth to 11th grades, plus faculty and staff, enter and take seats. Pomp and Circumstance stirs, and the seniors file in, in a processional of two lines.

Graduates sit in front of the tree facing the audience. Speeches by those other than graduates are limited, saving time for one of the more unusual aspects of an Oakwood Friends School commencement: Each graduate speaks for up to three minutes, in an often-emotional reflection on her or his years there.