As one of the culminating events in the celebration of their centennial, the Philipstown Garden Club (PGC) orchestrated a flower show, titled As Time Goes By, at the Putnam History Museum last Friday and Saturday, May 30 and 31. 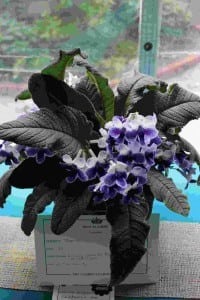 Open to the public, the show aimed to embody the purpose of a flower show as described by the Garden Club of America (GCA): “To set standards of artistic and horticultural excellence; to broaden knowledge of horticulture, floral design, conservation, photography and other related areas; and to share the beauty of a show with fellow club members and with the public.

Judging took place on Friday morning, and in the afternoon and honors were given in four divisions, each with multiple categories, devised by the PGC in accordance with rules set by the GCA. Many of these involved the interpretation, in floral design, of designs in other forms, i.e. quilts from different time periods, costumes representing different eras in Philipstown’s history and architecture in Philipstown over the past 100 years.

Other divisions covered container-grown plants in various horticulture classes. Several of these included Into the Woods for a Fern Foray! as well as Autumn’s Efforts, Spring’s Rewards and The Modern Day Healer.

Other non-floral categories welcomed photography, which had to incorporate plant material in some fashion, designs by novices and others by children.

An accompanying exhibit promoted heirloom varieties and highlighted the 50-year partnership between the PGA members and Boscobel, where they meet weekly from April to November to cultivate the herb garden.

An overview article published at the beginning of the PGC’s centennial year details the scope of their many local activities.

In addition to First, Second, Third and Honorable Mention Awards given out by GCA Judges in each division, numerous GCA awards were also awarded including:

The following Philipstown Garden Club awards were given: