A night of STEM (Science, Technology, Engineering and Mathematics) took place at Haldane School May 29. Organized by Haldane physics teacher Bob Mack, students and teachers in grades kindergarten through 12 participated. 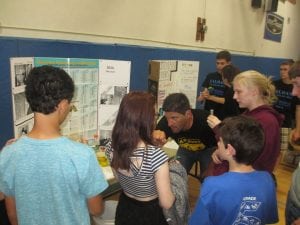 Julia Olsen described how you learn from online text or video, Wylie McDonald presented the effects of music listening habits on hearing acuity and Trevor Van Brunt showed the effect of reward levels on lying behavior in a card game. Jerome Famularo described electrophoresis which is measuring the mass of organic molecules, and the properties of Dr. Seuss’ “oobleck” were shown by Gerianne Martin. Henry Dul presented the crystalline structure of forged steel and Cameron Henderson gave a computer simulation of slime mold behavior.

Elementary School presentations included biodiversity in Cold Spring by grade three, Do you know your skeleton? by grade five, the science of musical instruments and the life cycle of a sunflower by grade two, and energy and mass by grade four. Information was also provided by the Manitoga/Russell Wright Design Center.