Fashion as Art runway show set for Sunday outside at St. Mary’s

Throughout history, fashion and art have been thick as thieves, each influencing the other. Often inseparable, as one evolved, so did the other. When clothing covered up the body more modestly, art was careful and immaculately detailed. When art became more abstract, free, and open, so did fashion, as people began exploring new silhouettes, daring to experiment with the baring of skin or never-before-used colors and prints.

This innovation in fashion and art ventures to Gallery 66 NY this month with the second annual Fashion as Art exhibition, which has already opened and runs through June 27. The theme of this exhibition is that designers are encouraged to create pieces based on an era in art. Also returning for a second time is an accompanying event, a free fashion show that will take place at 4:30 p.m. on Sunday (June 22), on the lawn at St. Mary’s Episcopal Church in Cold Spring. 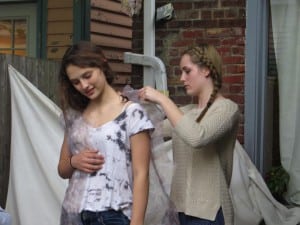 Student designer Marina Martin, right, makes an adjustment on her garment, to be worn by model Brooke Vahos. (Photo by Allison Marino)

The fashion show has been created and planned almost entirely by approximately 35 Haldane High School students, with significant help provided by Barbara Galazzo, owner of Gallery 66 NY, and Kelly Cutrone, owner of the fashion public relations firm People’s Revolution, and a frequent judge on America’s Next Top Model. She has also appeared on MTV’s True Life, as well as on Dr. Phil, The Hills and The City.

The fashion show has been produced, modeled, and styled entirely by Haldane students. Haldane students have also worked on providing sound and music, makeup and hair, photography, social media updates and other promotions. The show will feature work from designers around the country, and will also debut pieces by six Haldane students. The show will be judged by Cutrone and Carla Goldberg, artist and director of New York City’s Skylight Gallery as well as the bau Gallery in Beacon.

The students at Haldane have held meetings throughout the spring, organized and run by Alex Gariepy, sophomore, and Sara Jacoby, junior, the two girls who volunteered to be producers. Their organizational and creative prowess, and their ability to work confidently with teens and adults alike have instilled a level of professionalism and interest within the students involved.

Runway transformation — on with the makeup

During these meetings, the groups of students assigned to each task clustered together and brainstormed. Those working on social media passed around news, photos, and information like it was hot off the press. The models passed around sheets of paper with their names written so everyone could anonymously write a compliment, an activity thought up so that they could have the confidence to be bold and self-assured on the runway. 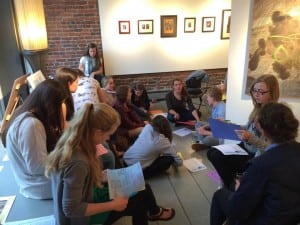 The makeup designers sat at a round table, grabbing at products and compromising about the distribution; solving problems like what makeup to do for models who are in two different looks; debating which color will bring out which hue the most vibrantly; and figuring out how to create the balance of the perfect ombre.

At the close of each meeting, designers met with their team of stylists, models and makeup experts to reach cohesion, to assign tasks, and to discuss how to bring the look to the next level with the help of accessories. Designer Macdara Heanue, a sophomore at Haldane, has enjoyed the process. “Doing the fashion show has allowed me to artistically express myself in a way that I would not be able to do without the show,” Heanue said. Throughout the meetings, pizza was consumed by the box, team names were thought up, bonds were made, and visions were brought to life.

When the two producers reflected on their experiences putting together the show, they responded similarly. “Although I may not show it often, words can’t describe the amount of gratitude I have for all the hard work put into this production from not only the people in the show, but from all the people contributing their time and effort to making this a success,” Gariepy said. “Thank you all for your patience and cooperation throughout this endeavor, we really couldn’t have done it without you all.”

Jacoby responded: “It’s awesome! I would say that it can be a little hectic at times, but it’s very rewarding to see everything come together. And I’m excited for the show so the town can see what creative and hardworking students Haldane has.” Both were gratified and proud of all the hard work put in by countless students.

Cutrone and Galazzo have put in numerous hours of hard work and care into the prospering of the students. When asked what motivated them to work with high school students, and how the experience has panned out, Galazzo remarked:

Last year, when I got the idea to do an art exhibit inspired by fashion, I thought it would be fun to also have a fashion show inspired by art, and to involve the local high school students. This year, I asked Kelly Cutrone to work on the project with me and she agreed. Kelly’s idea of asking students how they wanted to participate proved to be a great idea. Instead of just designing mannequins, students are designing outfits and producing all aspects of the fashion show. The scope of the work — from concept, through makeup, modeling, and final execution — is just fantastic. The students at Haldane are smart and creative, and it’s fun to watch everyone take a giant step forward under Kelly’s invaluable guidance.

In the event of rain the show will relocate to the Parish Hall. Refreshments will be served. For more information visit gallery66ny.com or call 845-809-5838.

Lucy Austin is a Haldane sophomore who has been involved in the Fashion as Art fashion show project.