‘Deep in December it’s nice to remember, without a hurt the heart is hollow’

The Fantasticks is that show you’re pretty certain you saw a long time ago — surely you must have, as it’s the longest-running musical in the world by all counts, and has spawned countless productions from high school to community theater and beyond. Or maybe it’s that show you were always intending to see, but never got around to because of the “Oh, it will always be there” factor.

The opportunity comes up again this weekend and next, as the Harvey Schmidt- and Tom Jones-penned musical, originally produced in 1960, settles into The Beacon Theatre for a six-performance run. Making the show, with its emphasis on the bittersweet rites of passage which young people growing into adulthood cannot avoid and which their parents must step aside to let them experience, perhaps more poignant than usual is that a real-life mother and daughter are involved with it: Christine Vittorini as director and Alexandra Vittorini in the lead (and only) female role of Luisa. 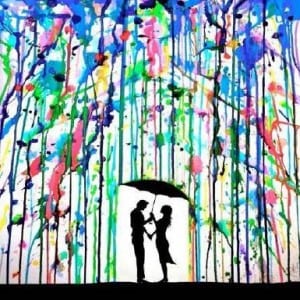 Christine Vittorini, who heads the Studio B theater program at the theater, got the idea to bring The Fantasticks to The Beacon, after seeing the show for the first time not long ago; but she was not originally slated to be the director. When, due to injury, the original director had to withdraw, Vittorini stepped in — “I got thrown in, and then I fell in love” — she relates, and mother directed her now 21-year-old Fordham University student daughter for the first time in a decade.

“I vowed never to do that again,” she laughs, continuing “but I’ve mellowed and she’s matured. Plus I’ve told the rest of the cast that when I snap at her it’s for all of you, and in return, she keeps me in check: she’ll shoot me a look meaning ‘You’re doing that thing again’ and I’ll get it.”

With its storyline involving two neighboring fathers who stage a feud and maintain a deception in order to trick their children into falling in love, a ruse discovered by their children, who then head off into the world, instead, separately, facing life’s challenges and hardships, emerging as bruised, but ultimately more aware and mature adults, the tale could be presumed to be loaded with enough parallels to any parent/young adult child relationship. It strikes a personal chord with Vittorini.

“There’s that connection of parent to child — if only they would stay within the confines of the garden you planted for them,” she said. “But you can’t kiss their boo boos anymore. Parents are totally prepared for falls off the bike with Bactine and cookies. But for this part of parenting there’s no way to guide without controlling.”

Seeing the show with Alexandra gave them a collective reaction. “When we saw it, we were totally taken by the universal story. Both of us had our own memories of first loves, very bittersweet. Afterwards we both found it so lovely; it’s such a universal story. We analyzed and processed it and talked about the themes.”

Adding to the intimacy of what has always been a small-scale show is the cast’s familiarity with each other. Alexandra Vittorini and her leading man, Ryan Kleess, have known each other since childhood, and the two men who play their respective fathers, Mark Williamson and Thomas Byrne, have also worked together previously and “have a natural rapport and chemistry,” says Christine Vittorini. Likewise, Lane Cassell and Craig Browne, whose characters play off each other on stage, have worked together previously as well. “Usually in a cast, there is that one person where you think ‘everyone is good except …’ But this entire cast, which also includes Chris Vallone as the singing narrator El Gallo and Curtis Eckley, is amazing,” Vittorini says.

Known for its most famous, opening song, Try To Remember, the score also includes Soon It’s Gonna Rain, Much More and They Were You, wistful, melodic ballads all, which capture the essence of the show overall; they will be performed on piano and harp, under the musical direction of Holly Roush. There is also dance, with much balletic choreography.

Vittorini said the show is “universal because of the commonality of the first-love theme. We all went through what this young couple goes through: the all-important, all-consuming first love and the effects the outside world has upon it — so innocent to start and so weary, damaged and strained as it goes and grows. Whether it survives or not, it’s just a beautiful story of love’s surprising durability.”

The Fantasticks will be performed from June 20 to 29, Fridays and Saturdays at 8 p.m. and Sundays at 3 p.m. The Beacon is located at 445 Main St., in Beacon. For more information and to purchase tickets visit thebeacontheatre.org or call 845-226-8099.