Michelle McEwen is the Haldane High School Valedictorian for 2014. During Michelle’s high school career she took 10 Advanced Placement (AP) classes, five classes with dual enrollment with SUNY Albany, and two classes with Dutchess Community College credit. She earned Principal’s List (GPA of 95 and above) each quarter of every year in high school. 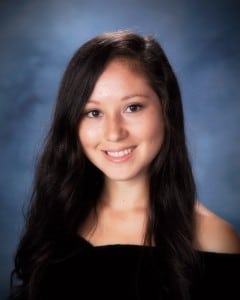 Next year Michelle will take a gap year with NextGen Academy, a leadership training program that involves planning, training, and fundraising for executing a service project in Africa. The following year she will attend Swarthmore College. She is currently undecided on a major but she is considering political science, sociology, and environmental science. She has not decided on her future career but knows that whatever field she ends up in she wants to promote positive change and be an advocate for equality, sustainability, and animal rights.

Michelle feels that Haldane’s small size provided her with many opportunities that she would not have had elsewhere. For example, she was able to start her animal rights interest group, ROAR, very easily after one conversation with Principal Brian Alm. She states that the multitude of AP classes offered allowed her to take a breadth of rigorous courses, such as AP physics, AP calculus and AP literature, which allowed her to be better prepared for college than she would have been. Michelle stated: “The teachers at Haldane have been simply amazing. They always were so helpful when I needed extra help.”

Michelle’s many achievements include three publications and Editor’s Choice awards in Teen Ink’s national print magazine. Her poems September, Biography and Without Wings were chosen from a pool of thousands of submissions to be published. Her nonfiction personal essay Becoming Human Before My Eyes was published in the Unification Church’s National Magazine and was the only article written by a high school student. Her essay Why I’m Optimistic about Our Nation’s Future won second place in the county in the VFW’s Voice of Democracy contest. In addition, in sixth grade she was a member of the Destination Imagination (DI) team that won the World Championship for Middle School in Knoxville, Tennessee.

Her many awards include the Marist College Medal of Science Award, the Bausch & Lomb Honorary Science Award and the Air Force Math and Science Award. She is a Commended National Merit Scholar and an AP Scholar with Honors. She earned Highest Average awards in almost all subjects.

Michelle founded the interest group Reaching Out for Animal Rights, or ROAR, this year out of her passion for promoting the well-being of animals. Since ROAR is new, she ran the group’s meetings and organized several projects (including the Animal Cruelty Awareness Week gift drive, letter writing campaigns, petitions, documentary viewings, and a field trip to the NYC VegFest) on her own. Michelle also found time to take part in the Leo Club, the National Honor Society, the Literary Magazine, and the Yearbook Club (in which she designed this yearbook’s cover and theme).

She sang with the high school chorus and the Blue Notes and performed in the casts of the musicals Crazy for You and Anything Goes. She also was a member of the Varsity Girls Tennis Team and the Varsity Winter Track Team. Michelle is actively involved in her church in Tarrytown, where she served as a youth group team leader and Sunday school assistant teacher.

The Haldane administration congratulates Michelle and her family on all of her achievements with best wishes in her future endeavors.