Sean Patrick Maloney, the Philipstown resident and Democrat who serves in the U.S. House of Representatives, wed his long-time partner Randy Florke Saturday evening (June 21) in a ceremony that packed St. Mary’s Episcopal Church, closed streets in the heart of Cold Spring, and brought out pedestrians to line the sidewalk for a glimpse of dignitaries. 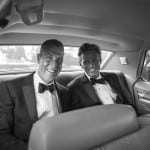 The latter included Rep. Nancy Pelosi, the House Minority Leader or Democratic Party chief in the House; Rep. Steny Hoyer of Maryland, the Democratic Party Whip or assistant House leader; and Rep. Joe Kennedy, another Democrat, from Massachusetts. However, Former President Bill Clinton and his wife, Former Secretary of State Hillary Clinton, were not present.

A neighbor or two of Maloney and Florke on Lane Gate Road, Philipstown Democratic Party activists, members of Maloney’s Congressional staff, including Philipstown Town Board Member Nancy Montgomery who recently started working for Maloney, and dozens of friends from across the country were among the 250 attendees. The Florke-Maloney children, Reiniel, Daley, and Essie, and other family members made up the wedding party. Joined by Pastor Paul Briggs of Antioch Baptist Church, Bedford Hills, New York, Father Shane Scott-Hamblen, rector of St. Mary’s, officiated at the Episcopal service.

Like other onlookers, most news reporters and photographers were kept away from the church by the security arrangements and personnel: U.S. Capitol Hill police — in town for the occasion, New York State Police, Putnam County Sheriff’s Department, and Cold Spring police. About a three-block stretch of Chestnut Street, along the church property south from the traffic light, and Main Street from High Street to Chestnut Street-Morris Avenue (at the traffic light), were blocked to vehicles, forcing drivers to find another way to get in and out of the village or from one end of it to the other. Strings of cars headed south on Morris Avenue ended up turning left at the light, to proceed east on Main Street toward Nelsonville.

Security officials permitted four media organizations, including Philipstown.info, onto the church property. A news media camera drone hovered noisily in the air outside the church’s main entrance, waiting for the wedding couple to exit. 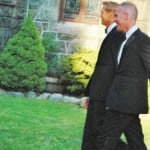 Randy Florke, left, and Sean Patrick Maloney cross the church lawn on their first, unofficial exit from the church after the wedding. Photo by L.S. Armstrong

As the service ended, Maloney and Florke emerged from St. Mary’s to walk across the lawn, pause by a table with lemonade for participants, and re-enter the church through the sacristy. On their brief foray outdoors, they did not make any public comments, but later that night Maloney’s office issued a statement from the pair. “Even after 22 years together, we’re overwhelmed by how blessed we feel to celebrate this special day with our friends and family,” they said. “With our three kids by our side, this couldn’t have been a more perfect day. Thank you to all our friends near and far for love and support as we continue to fight to ensure all families can experience the joys of a lifetime commitment.”

Shortly after re-entering the church Saturday evening via the sacristy, the couple left it again, through the main doorway, preceded by throngs of wedding guests and showers of rice. They quickly ducked into their decorated wedding car and left. A convertible carrying their children, decked with a sign announcing “our parents just got married,” followed. Then the numerous guests departed, too.

A reception at the couple’s home that evening included dancing, fireworks and a celebration subsequently described by one invitee as totally incredible.

Originally from New Hampshire, Maloney, 47, earned a B.A. degree in international relations from the University of Virginia in 1988 and a law degree from the same university in 1992. He worked for Clinton in the White House and for two New York governors before successfully running for the 18th New York Congressional District seat in 2012.

The car reserved for the Maloney-Florke children heralds the family’s news. Photo by L.S. Armstrong

An Iowa native, Florke, 51, works as a real estate and design executive in New York City, for The Rural Connection Inc., a company he founded in 1996. He graduated from The Tobe-Coburn School in New York with a degree in fashion.

Police removed the barriers on the village streets once attendees had cleared St. Mary’s grounds and the intersection. But a line of yellow tape and orange barriers remained at the edge of the church lawn on Sunday. And little mounds of rice, swept by church volunteers away from the door, greeted Mass-goers that morning.