As Alice Cooper famously sang “School’s out … for summer!” Cooper, who wrote the song because he believed the final bell is one of life’s greatest moments, is quoted as saying “… the last three minutes of the last day of school when you’re sitting there … it’s like a slow fuse burning.”

Jeff Sniffen’s sixth-grade class at Haldane Middle School obviously agreed as they celebrated the end of the 2013-14 school year on Wednesday, June 25. Elementary school students were dismissed the following day. After all of her classmates had departed, one sixth-grader lingered to speak with Sniffen. “Thanks for believing in me this year,” she said. A great way for both to end their school year. 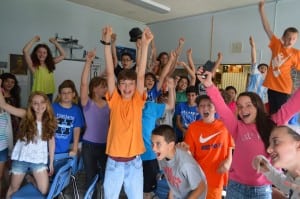 One thought on “School’s Out!”