With the vast majority of an aging U.S. population wishing to spend their lives in the familiar surrounds of their homes, rather than moving to a facility, municipalities and communities must facilitate the ability of a population to “age in place.”

This is the stated opinion of the American Association of Retired Persons (AARP), delivered by Associate State Director Christopher Widelo in a talk to the Philipstown Seniors group, June 18, at the Chestnut Ridge complex in Cold Spring. 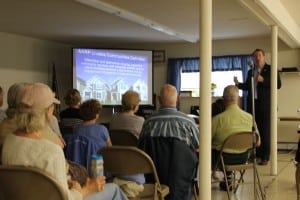 Widelo was introduced by Linda Ann Ewen, who began by drumming up business for Philipstown Seniors, mentioning that the 107-strong members go on trips, hold luncheons and host “informational events like this one — if you’re over 60, please join us,” she said. Philipstown Town Councilors Nancy Montgomery and Mike Leonard and representatives from the senior-living development at Glassbury Court and the Brookside Park mobile homes also attended.

Widelo has had a lengthy career with AARP, largely doing policy and advocacy work. He described the entity as “transitioning away from being strictly a ‘retirement’ organization. We have a social mission: to allow people to age with dignity and respect and have the resources to do so.”

Once comprised of elderly retirees, AARP now includes many people in their 50s and 60s either still working or embarking on new careers. “People want to have a sense of purpose,” Widelo said. To thrive, this group needs “livable communities,” with essentials like affordable and appropriate housing; supportive community services; and adequate mobility options which facilitate personal independence, he said.

Acknowledging that for some, nursing homes and assisted living facilities are absolutely necessary, Widelo stressed that many people do not need that level of care but are sometimes forced into it by the lack of infrastructure which would allow them to live independently. According to AARP surveys, 85 percent of the older population wish to remain in their current residence for as long as possible.

But those homes weren’t built to accommodate or cater to older people and need retrofitting. In addition, a similar percentage prefers to stay in the community, wishing to be near family and friends; to stay close to their current doctors, work and places of worship. The amenities most frequently desired are: a bus stop, grocery, pharmacy, hospital, church, train, big box store, entertainment and mall.

For that to happen, transportation factors into the equation. “Are there groups of people who want to walk together? Is there a shuttle?” Widelo asked. It’s worthwhile for municipalities to lobby for these things, he continued, because “an aging population is good business for business. But there may be a need for accommodation to make these things operate successfully,” Widelo said.

Widelo pointed out that boomers (born between 1946 and 1964 or 1965) and millenials (1980 to 2000) share many values. “One out of every four boomers and one out of three millenials live in cities and don’t use cars as their primary mode of transportation,” he said. “Six in 10 respondents would pick smaller homes if it meant a commuting time of 20 minutes or less. Multi-generational households are coming back into vogue, and 85 percent of new college grads are expected to come back and live at home.”

Aging in place with supportive services

With all this data supporting the need for services geared to these populations, Widelo turned his attention to “strategies to foster change.” These are things communities can do themselves: putting up better signage; light poles; bike lanes; constructing more sidewalks; making traffic lanes narrower and putting in traffic circles to slow traffic down; adding curb cuts and ramps; having stoplights with countdown signals. Private homes need changes made, some easy, others more difficult and expensive.

These include bigger knobs on doors for people with arthritis; grab bars in the shower — which need special framework construction; wider doorways to accommodate walkers; space for a 360-degree turn in a wheelchair in a bathroom; one-floor living; first-floor bathrooms. Widelo said some of these could be achieved in a “cost-neutral” way. “Communities can ‘incentivize’ private builders to include some of these features,” he said. “The population demographics will change and will have to be acknowledged, or you’ll leave this town and stop paying your taxes.”

Ewen, addressing the group after Widelo’s presentation, said the Town of Philipstown should work in developing a plan. “We haven’t identified all our seniors yet, for one thing. We’ve started; we need to work at grassroots because some of this doesn’t cost anything at all. It was a big step when the town gave us exercise classes, but it’s being done piecemeal. We need to work with the Town Board as a group, starting with a plan.”

Widelo said that AARP can work with town governments and administrators to help implement or at least strategize ideas and can help draft legislation.

“Sometimes it just takes looking at it through a different lens — an ‘Oh, we can do that, we just hadn’t thought of it that way,’ kind of thing,” he said. “There’s a reality coming and without recognition of it there’s going to be a crisis.”

Before questions from the audience began, Montgomery noted that, in relation to municipalities Widelo had cited as accredited by the AARP as “aging-in-place friendly,” Philipstown, with just 9,500 people, is small. “We in Philipstown don’t have an office of the aging. We don’t have a budget but we have a plan for safer walkways on [Route] 9D,” she said. “Also the town is working to do what we can with the resources we have. If we have an actual agency, taxes will go up. At the local level, the supervisor and board members understand the challenges and would like to do more.”

Saying he understood the constraints of making changes in such a small place, Widelo suggested thinking beyond the confines of the town. “Look at a regional approach if you’re unable to afford it without others,” he said.

Audience questions and statements followed, with grievances over a perceived, consistent lack of attention and funding from the county. “We send a lot of money over there, but don’t get a lot of benefits,” one attendee stated.

Widelo replied that people need to be proactive. “Contact your county office for the aging and legislative offices for answers to your questions. Know what it is you’re looking for. Be specific,” he said. “You need to ask the government to shift funding as the population shifts. The money needs to follow the need. I’m very sensitive to the limitations in Cold Spring but if these things are important to you, think about them and the AARP is happy to help. Don’t expect anybody else to do it for you — be the squeaky wheel.”

An audience member objected that Widelo was “speaking to the wrong group — we need people to help us out.”

“I’ll challenge you a little on that,” Widelo replied. “You probably didn’t think about this when you were younger. To expect other generations to think about it is just not going to happen. You know things and you need to verbalize it to elected officials. Our biggest problem right now is legislation in the state budget.”

With that, another attendee asked Widelo: “Could you use some of us to join you [to] be a voice?”

“Yes!” he said. “The seniors need to be a group. I can come again and talk about advocacy strategies.”

One thought on “Seniors Urged to Advocate ‘Aging In Place’ Changes”