S’mores confuse me. Even at my advanced age, I continue to think I like them, and devour one enthusiastically whenever the opportunity presents itself. Yet they disappoint me, every single time.

So why do I keep on eating them? Because they seem like such a great idea. A crisp, whole-grain biscuit, melted chocolate (melted chocolate!) and a toasted marshmallow: What’s not to like? Each part of the equation is delicious on its own. Moreover, the combination makes perfect sense — at least theoretically. But theories lack taste buds, as my mouth reminds me upon encountering yet another s’more. This is not great, it declares. Not even particularly good. 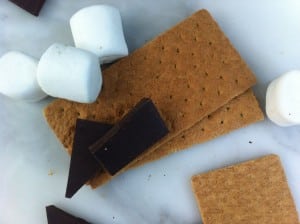 My brain wants to know why. WHY?!? Yet my mouth, normally the primary source of chattiness in my life, keeps its counsel.

One theory I’ve pondered is that s’mores belong to that vast category of foods that are simply not as good as they were when we were kids, due to the fact that most of the stuff we eat now comes from vast multinational conglomerates rather than charming oompa-loompa-staffed factories. Hershey’s chocolate is a prime example.

But under scrutiny, this theory doesn’t hold water because even as a child I was unimpressed by s’mores. In those days, I thought I was the only one. And since I hated to stand out, I mimicked my peers by whooping enthusiastically whenever some grownup — be it Brownie leader, youth group director, or YMCA counselor — announced that we were about to have s’mores. Woo-hoo! Lucky us! Yet from the very first time I ate them, standing around a picnic table in a cold drizzle that my sashed Brownie uniform with its smattering of badges did little to mitigate, I knew something was wrong. Even Mallomars were better. And they were pretty bad.

In recent decades I have discovered that I am not alone in my yearning for better s’mores. Many pastry chefs have tried their hand at making them from scratch, using homemade graham crackers topped with homemade marshmallows and artisanal chocolate. These are good, to be sure. But I’m not ready to go to such lengths myself for a campfire treat that will be peppered with ashes. However, I have upgraded s’mores the no-bake, supermarket way, by buying Carr’s Wheatmeal biscuits and good chocolate, and also by using Petite Ecolier cookies, which come with their own chocolate layer already in place, and are quite delicious. These are as gourmet as I’ve been willing to go in pursuit of better s’mores.

Until now, that is. Recently, two things happened. First, I was talking about desserts for the GUFS eighth grade graduation party with the lovely Patty O’Roarke, and she happened to mention s’mores (which got my brain all excited, like a dog that never learns). Second, I made a graham-cracker-crusted pie for a dinner party. The pie was eh, but the crust was terrific.

A few days later, I was wondering what to bring to the graduation party, and meanwhile, somewhere in the back of my brain, those two recent events smashed into one another. Suddenly it occurred to me that I must make s’mores bars for the party: Graham cracker crust, chocolate ganache (“ganache” sounds fancy, but it is just melted chocolate mixed with heavy cream so it stays soft even after it’s cooled) and marshmallow topping. I will make the marshmallows from scratch for the occasion — they are surprisingly easy, super delicious, and cheaper to make in quantity. Plus it’s a celebration! But a simplified version of the bars, topped with store-bought marshmallows, is below.

Either way, when I serve it, I expect whoops of delight — phony or otherwise.

Using hazelnuts in the crust gives the bars a Nutella-like flavor. You can also omit the nuts entirely; reduce the butter by 2 tablespoons.

One thought on “Mouths to Feed: S’more Than a Feeling”