An important piece of American naval history sailed past Garrison and Cold Spring on Monday (June 30) attracting appreciative crowds along the way. The USS Slater, a cannon-class destroyer escort, left Staten Island early Monday morning and passed by Philipstown around 1 p.m. as it made its way up the Hudson River to Albany. It was escorted by two New York State Marine Highway tugs — the Margot and the Frances. The Slater had been on Staten Island since April where it underwent repairs. It is the only destroyer escort still afloat and one of only a dozen still in existence. 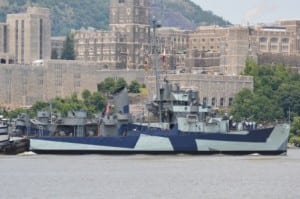 The USS Slater sails past the U.S. Military Academy at West Point on June 30.

Several dozen people waited atop the Bear Mountain Bridge to watch the historic ship pass underneath. As it approached West Point, the Slater offered a gun salute to the U.S. Military Academy. West Point responded in kind with its own booming salute. Further upstream at Cold Spring, a large crowd assembled on the dock, anticipating the ship’s arrival. Around midnight the Slater entered the Port of Albany, coming into her berth in the downtown area at 7 a.m. on Tuesday.

Some local spectators were surprised at the Slater’s appearance. The only destroyer escort restored to its World War II configuration, it is decked out in “dazzle” camouflage. According to the Slater’s website, the painting scheme was “purposely confusing.” Its highly contrasting colors, “sharp zigzagging lines and jagged geometric shapes” were designed to make it difficult for enemy ships to determine its size, direction and speed, making it more difficult to attack.

Built in Tampa, Florida, the USS Slater was commissioned in 1944, one of 563 destroyer escorts constructed in the U.S. between 1943 and 1945. Their classification hints at their primary mission, which was to escort allied convoys during WWII. They were fast, maneuverable, long-range ships, with capabilities that aided them in anti-submarine warfare.

The Slater followed U.S. Navy tradition, deriving its name from a naval hero — in this case an Alabama sailor, Frank O. Slater, who was killed at his gunner’s post on the USS San Francisco during the battle of Guadalcanal. Reports state that Slater never stopped firing at a Japanese bomber — even knowing he faced certain death as the plane flew directly at his position and crashed into the ship. Slater was posthumously awarded the Navy Cross for gallantry in action.

The Slater served in both the Atlantic and Pacific theaters before being assigned to the reserve fleet after the end of the war. In 1951, as part of the Truman Doctrine, she was transferred to the Greek Navy and renamed the Aetos or Eagle. She served in Greece for 40 years, primarily in the Aegean Sea. Decommissioned in 1991, Greece donated the Slaterto the Destroyer Escort Sailors Association. She arrived in the Port of Albany in 1997 and now serves as a museum ship there. In 1998 the USS Slater was listed on the National Register of Historic Places.

The Slater also had a movie career, appearing in three motion pictures including the 1961 film The Guns of Navarone starring Gregory Peck. 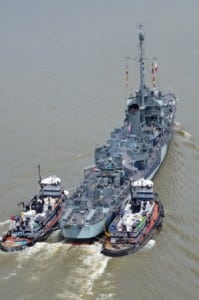 Of more than 500 built during World War II, the USS Slater is the only destroyer escort in the country that remains afloat.

The Paper spoke with 88-year-old Don Shattuck, an Albany area resident. At age 18 he was a Petty Officer 3rd Class, serving as a radio technician aboard the destroyer escort USS Harold C. Thomas in the South Pacific. While his ship was escorting a convoy, Shattuck saw the fleet that was being assembled for the anticipated invasion of Japan. “It was a massive array of ships,” he recalls. Many years later Shattuck said he “was thrilled when I learned there was a destroyer escort in Albany.” He now serves as a volunteer on the Slater. His own ship had stopped having reunions because so few veterans remained, but on one occasion a group of former destroyer escort captains met in Albany and visited the Slater. To Shattuck’s delight he was able to speak to his old commander. “It was a very emotional experience for me,” he said. “We had a good chat.”

Now back at its berth, officials hope to have the Slater open again for public tours in time for the Fourth of July. Regular hours will be Wednesday through Sunday, 10 a.m. to 4 p.m., through the end of November.

The ship is located in downtown Albany near the intersection of Broadway and Quay Street. The USS Slater is owned, maintained, and operated by the Destroyer Escort Historical Museum, a private, non-profit, charitable organization that receives no regular government support. Donations to the museum are tax-deductible. Visit the website at ussslater.org.

One thought on “USS Slater Sails Upriver to Albany Home”