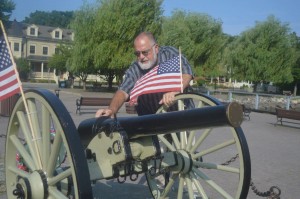 Alexander Randall V examines the Parrott Gun on Cold Spring’s riverfront. Randall is the great-great-grandson of Peter Pearse Parrott, whose brother Robert Parker Parrott’s primary military ordnance contribution was to take the rifled cannon concept and apply it successfully to American artillery, with some innovations all his own, around 1860 — a significant factor in the outcome of the Civil War.

Randall, who visited Cold Spring for the first time earlier this week, said that the Parrott brothers worked together at the West Point Foundry where the renowned Parrott gun was produced. Below is a photo of one patent model of the gun. Randall recalled as a child always wanting to play with the model, which sat on a mantel in his family home. He now lives with his wife and children on the Island of St. Thomas in the U.S. Virgin Islands. 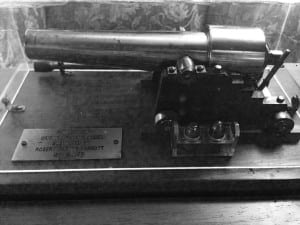 One thought on “Gun Inventor’s Descendant Pays a Visit”