Garlic mustard, Japanese knotweed, Japanese barberry and Oriental bittersweet are just a few of the invasive plants that have monopolized our local landscape. During Invasive Species Awareness Week (July 6-12, 2014), environmental organizations across the state are trying to bring attention to the many issues our native plants, trees, wildlife and fish are facing. Wherever you turn on land or at sea, there are threats to local flora and fauna and we have two nearby upcoming events where you can learn about them.

This Saturday, July 5, Master Gardeners from the Cornell Cooperative Extension will be at the Cold Spring Farmer’s Market at Boscobel to identify plants that you bring in and answer questions about invasive species management. They can also do soil pH testing for you on the spot for a $5 fee.

Next Wednesday, July 9, the Cary Institute of Environmental Studies in Millbrook is leading a nature walk, Hudson Valley Invaders, on their grounds that will include how to deal with these undesirables in your own yard.

A website maintained by the Cornell Cooperative Extension and Sea Grant New York has resources for gardeners, hikers, and boaters, among others, to raise awareness about how invasive species are spread and what to do about them. Every county in the state has activities planned for next week. Check the website for other resources.

Stopping the spread of invasive species matters because we’re losing native species and our landscapes are being irrevocably shifted. Everything in nature is interconnected and plays a role for something else in the ecosystem. Once we lose or take out certain species, other parts of the ecosystem that depend on it are affected.

Walk through a forest now and instead of native wildflowers that support bees and birds, you’ll find the vegetation that I mentioned previously. Japanese barberry, a shrub that many people choose to plant in their yards, flourishes in our woods and has crowded out other plants. Deer don’t eat it like they do native plants and it has several traits that make it suitable for domination.

Garlic mustard can be edible as well.

For instance, Japanese barberry is hardy, adapting to drought, freezing temperatures and heavy rain. The weather pretty much won’t affect it. It spreads easily and can root from seeds that birds drop after eating its berries. To eradicate it, it has to be removed from the roots. A single root can continue growing entirely new shrubs. Also, it gets leaves earlier than native vegetation in the spring and can block the sun from other plants trying to grow around it.

If you aren’t convinced yet about the dastardly nature of this barberry, consider that studies have shown it is a perfect host for ticks that carry Lyme disease. Putnam County is sixth in the nation for Lyme infections and our overpopulation of deer combined with the spread of this invasive plant contributes to that problem.

Japanese barberry’s spread is a good example of how our choices can impact the environment around us. It can be found as part of the landscaping in many yards. People like it for its hardiness and deer resistance, but the larger consequences aren’t worth it.

Before you bring home a plant from the garden center, know what you’re doing and consider other possibilities, instead. Viburnum trilobum is a native shrub that will grow well and provides food for birds without any of the negative issues that barberry brings with it.

Garlic mustard is another plant that outcompetes our native wildflowers and monopolizes a landscape. It’s a biannual plant that has white flowers in the spring and it will take over any area where it becomes established. It doesn’t have any value to native wildlife and replaces food sources and habitat that sustain birds and bees.

The best way to control it in your yard is to pull it by hand when the ground is wet before it flowers. If any bit of root is left, it will reestablish, though. Don’t compost it; seed pods can be viable for up to five years. You could consider eating it, though. It’s a bitter green that I’ve read can be added to salads, used for pesto or sautéed with garlic like any other green. It’s supposed to be at its best before it flowers.

There are many more issues related to the spread of invasive species, many of them economic. We spend a tremendous amount of money trying to eradicate and control threats. The spread of the zebra mussel is a good example. For more information, visit the Invasive Species Awareness Week website or check out one of the upcoming events. 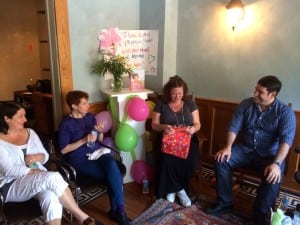