Crop of new grads to focus on culinary field

Five students in the class of 2014 chose to take a different path than the majority of their peers at Haldane. While most students spent the school day in classrooms, these five honed their skills in the kitchen thanks to a partnership with the Putnam/Northern Westchester BOCES (Board of Cooperative Educational Services). At BOCES, learners receive a hands-on education to prepare them for jobs in the industry.

The two-year program begins with a rotation between baking and pastry arts, culinary arts, and hospitality for the first year. During the second year students can choose to either pursue baking exclusively or continue the rotation. During the baking rotation, students learn about different baking methods used to create various dishes. The culinary rotation focuses on knife cuts and food safety, as well as learning the base sauces used for most foods. Classes elaborate on the history of the culinary field and how to properly serve and care for customers.

Giana Grandetti was drawn to the program for myriad reasons. “I chose the program because my whole life has been based around food; my brother is a chef, and food is the central part of every family gathering. It’s what I wanted to learn, what I’m about.” Grandetti enjoyed getting experience in the bake shop at BOCES, and considers joining the program to be one of the best decisions she ever made. Grandetti will study business at SUNY Delhi in the fall, as she’d like to learn how to run and be a part of a restaurant.

Brianna DiFrancesco was another of the culinary students from Haldane who brought her studies to BOCES. “I would recommend the program to people because it really helped me get into my dream college and prepared me for the classes I’m going to be taking,” DiFrancesco said. She plans to earn her associate’s degree in baking and pastry arts from Johnson and Wales and eventually take over her family business, Whistling Willie’s. She also hopes to open up her own bakery. 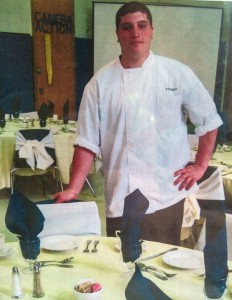 Ian Geithner, Tommy Colamarino, and Gareth Gore attended the culinary program at BOCES and will be going on to the Culinary Institute of America. Geithner’s favorite dish to prepare is the mouth-watering glazed salmon. His long-term goal in the culinary field is to own his own restaurant(s).

Colamarino chose the BOCES program because he desired to go in a clear direction after high school. He’s enthusiastic about attending the CIA, commenting, “I chose the CIA not only because of its reputation in successful chefs that graduated from there, but also because of the beauty of the campus and the opportunity to be in a practical hands-on culinary experience.” The savory chicken cutlet Parmesan is his favorite dish to prepare, and Colamarino, too, hopes to own his own establishment in the future.

Gore is excited to attend the CIA in the fall as well. His favorite dish to prepare is scallops, although he explains, “Any seafood dish is up there for me.” His goal down the road is to open up a bar in California that offers high-end food.

All in all, it seems the BOCES program has opened new doors for young aspiring chefs.