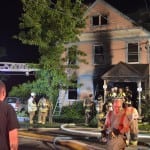 The couple escaped, but their belongings, including such necessities as medications, clothing, computers, and personal and professional records, remained inside as firefighters fought the blaze and smoke, shooting streams of water into the burning wooden structure, which Wright said dates from 1880.

According to members of the Cold Spring Police Department, who raced to the scene on High Street along with the fire departments, the alert reached fire and police at 7:39 p.m., not long after an early evening rainstorm. 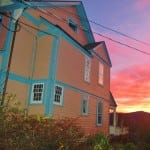 The side of the Impellizzeri-Wright house basks in a fall sunset in 2011.
Photo by L.S. Armstrong

Firefighters applied streams of water from hoses, as a lingering daylight turned to darkness.

The cause of the fire remained undetermined. “I wish I knew,” what started it, Impellizzeri said, as she watched from the street as the fire departments fought the fire and neighbors and residents from throughout the village turned out to see what was happening and offer help and condolences. She said she became aware something was amiss when she detected an unusual aroma in the house. “It smelled like marshmallows” roasting, she said. She opened her kitchen door and found smoke pouring in from the back porch. A propane tank is located next to the porch, although apparently “it was not the cause, but the line may have been,” she said. Asked if she and Wright had left immediately, she answered emphatically: “Absolutely!”

Then the flames gave way to thick billows of smoke – black, gray and dingy white — pouring from the house. However, the flames subsequently resurged, shooting from an upstairs window on the right side — to be attacked by fresh streams of water from fire hoses. Again, smoke replaced the flames — which, ultimately, did not seem to recur. Meanwhile, firefighters using a ladder truck from Fishkill worked on the roof. 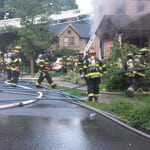 Impellizzeri, a retired corporate executive, volunteered for the Cold Spring Special Board for a Comprehensive Plan-Local Waterfront Revitalization Plan at its inception in 2006 and remained on that board. She is on the Cold Spring Planning Board, was a volunteer with the Putnam County Historical Society (now the Putnam History Museum) walking tours, and has been active in other local philanthropic efforts.

Wright had a long career as a political affairs journalist for national news media before becoming a corporate public relations official. As a young man, he served in World War II. 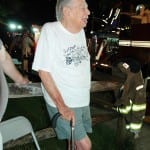 A stoic Dan Wright watches firefighters attacking the blaze in his home. Photo by L.S. Armstrong

While his home burnt, he noted that “I’ve got a driver’s license, credit cards, medications, prescriptions, everything” still inside. He observed that the house had not yet collapsed. “There’s big old beams in there,” holding it up, he said. Like the firefighters and Impellizzeri, “I have no idea” of the cause of the fire, he added. “Lightning is one guess.” He was upbeat, despite the obvious losses. “I had worse times in World War II than I had tonight.”

In time, as the firefighting seemed to be slowly winding down, outside the charred house police and firefighters placed warning signs: “Dangerous Building. Do Not Enter. By Order of the Cold Spring Fire Company.”

A neighbor, Cathryn Fadde, a Cold Spring village trustee and owner of Cathryn’s Tuscan Grill restaurant in Cold Spring, offered Impellizzeri and Wright dinner once they finally left the scene. Other neighbors opened their doors to provide shelter and a firefighter supplied contact information for the Red Cross.

Tuesday morning, Chief Josh DiNardo of the Cold Spring Fire Company said that when the first fire department unit arrived on High Street, “heavy fire was advancing throughout the home and rear of the structure. A ruptured residential propane tank next to the home assisted with fueling the fire and pushing the flames up the exterior of the home. An initial interior attack was abandoned by the incident commander due to heavy fire conditions.” He added that the “Putnam County Fire Investigation Team is continuing their investigation into the cause. However it has been determined to be unsuspicious in nature. No individuals were injured and all units were back in service at 12:45 a.m. Tuesday.”