The Towne Crier Café is the next stop for The Grand Slambovians A Box of Everything Tour in the United States. Just back from the UK in support of this first release with Sony/RED-distributed Red River Entertainment, the band put together ‘the greatest Slambovian hits you’ve never heard’ to introduce their music to a whole new audience. They will perform at 8:30 p.m. on Friday, July 11, at the Towne Crier Café in Beacon.

Friday’s hometown CD release show at the Towne Crier is a special event with guest artists who contributed to the new release joining in the fun. 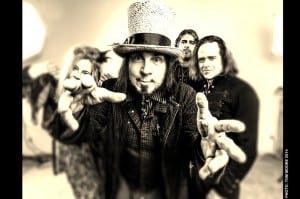 The Grand Slambovians perform July 11 at the Towne Crier Cafe in Beacon.
Photo by Tom Moore

Formed in Sleepy Hollow, New York, The Grand Slambovians (aka Slambovian Circus of Dreams) has pioneered the alt-folk/Americana genre totally under the radar for over a decade. Defying traditional rules of success they built their career from the ground up with a loyal fan base fueling and supporting them since their open-mic days in New York. Approached by major labels for years, in 2013 the band signed with Red River Entertainment with hopes of expanding the Slambovian territory.