Pushing back against misconceptions

Philipstown’s fire departments in Cold Spring, Garrison, North Highlands and Continental Village are used to facing some heat — though not always at a fire. Public debate over fire hall construction, municipal oversight, possible consolidation of services and fire company budgets has been red hot at times in recent years. But there was no debate about the value of local fire protection on Monday evening (July 7), when five area fire companies quickly responded and worked in unison to fight a blazing inferno at a home on High Street in Cold Spring.

Six weeks earlier, another serious fire on Main Street in Nelsonville drew a similar rapid and effective response. The two fires shed light on the actual work of local fire companies — a job that is far removed from politics, conflict and public meetings.

Less than 24 hours after Monday’s fire, The Paper met with the Cold Spring Fire Company (CSFC) Chief Josh DiNardo, immediate past Chief Matt Steltz and Assistant Chief Steve Smith to discuss what took place on High Street, the challenges the fire company faces and some of the public misconceptions they would like to change.

One misconception that Monday’s fire helped put to rest is the notion that local fire departments take too long to respond. “We were dispatched at 7:39 and were on the scene at 7:41,” DiNardo said. Within five minutes, hoses were connected to the nearest hydrant and water was being pumped onto the fire. “That’s professional-grade response time,” Steltz added.

Chief DiNardo said the public also doesn’t understand what happens between the time someone calls 911 and the moment when a fire truck pulls out of the Main Street fire hall. Calls to 911 are not routed to the nearest fire department but rather to a central dispatch in Carmel that handles all of Putnam County. Several people called 911 within a short period of time in reporting the High Street fire.

“The dispatcher handles all calls for the same fire, makes an assessment about how serious it is and then gets the word out,” Steltz said. DiNardo said that for a structure fire, neighboring fire departments are put on stand-by immediately while the chief of the fire company in whose district the incident is occurring assesses whether or not additional help is needed. On Monday, DiNardo didn’t hesitate in calling for extra support.

The men and women from five area fire departments who raced to the scene on High Street on Monday are all unpaid volunteers. The Cold Spring Fire Company alone sent 23 firefighters to help battle the blaze. (Photo by M. Turton)

If there’s one thing Steltz, DiNardo and Smith all agree that the pubic doesn’t always understand, it’s that CSFC’s members are unpaid volunteers. “People think we get paid,” Steltz said.

Taxpayers should breathe easier knowing they aren’t picking up a tab for paying local firefighters. According to a July 5, 2014, article in USA Today, the average firefighter in the U.S. earns slightly more than $48,000 a year. In New York City, a firefighter with five years experience receives more than $99,000 in annual salary and benefits. Smith said that 23 CSFC members assisted at the High Street fire and that the fire company has 40 active firefighters.

A controversial report by Ron Graner in 2011 that examined fire protection in Philipstown painted a dim portrait of leadership in and cooperation among local fire departments. The two recent fires in Cold Spring presented a dramatically different picture. Leadership and chain-of-command at both incidents were clear. DiNardo acted as incident commander at both, with neighboring fire departments responding to his direction. The fires also demonstrated a high degree of cooperation and mutual aid.

At High Street, the Fishkill Fire Department provided its ladder truck, a piece of equipment that CSFC lacks and is vital in getting water to the upper floors of buildings. Putnam Valley dispatched its Fast Team, trained to rescue firefighters who become incapable of exiting a burning building on their own. Putnam County Emergency Services routinely plays several roles. Its Fire Investigation Unit determines the cause and origin of fires. Specialized expertise in dealing with hazardous materials is also provided. “We have basic capabilities to deal with Hazmats, but … they’re the specialists,” Steltz said. The county also provides its fire police who, among other duties, can close roads when needed.

Rumors often abound at a fire scene and High Street was no exception. Some onlookers were heard speculating about firefighters having “problems getting water,” a claim that DiNardo squelched. “Water was perfect that night, there was no lost pressure. It wasn’t an issue at all.” That supports what Cold Spring Superintendent of Water and Sewers Greg Phillips has reported to the Village Board in recent months — that pressure at fire hydrants increased significantly after water mains were cleaned and relined last year. 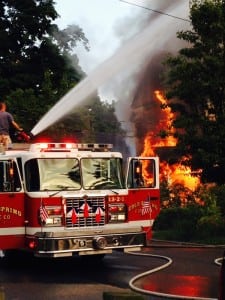 A propane tank on the property was a major factor in the fire but not the cause. “When we pulled up, the back of the house was in flames and fire was seeping into the front,” Steltz said. “The propane tank (was like) a blow torch. It was shooting fire into the house.”

A group of firefighters attempted to enter the house but were forced to turn back because the heat was so intense. Steltz called it the hottest fire he has ever experienced. “There was a lot of heat, a lot more fire than usual,” he said. No one was hurt. Residents Anne Impellizzeri and Dan Wright escaped injury but lost all their possessions.

Steltz worries that volunteer firefighters may become a thing of the past. His concern stems from the commitment that is required. While some fire company members work away from danger, others sometimes have to enter a building in order to effectively fight the fire. Qualifying as an “interior firefighter” requires skills that can be acquired only through extensive training.

DiNardo said that candidates must now complete 112 hours of training offered by Putnam County to qualify as an interior firefighter. That means driving to Carmel twice a week over a six-month period. “When I qualified for interior I only had to do 60 hours of training,” Steltz said. “How many people are going to want to drive to Carmel twice a week?” Despite his concerns Steltz said that the CSFC has enjoyed a recent influx of younger members. Currently, about half of the company is qualified as interior firefighters.

Relief, anger and a new kind of life saving

Fighting fires is not without emotion. “There’s a big feeling of relief when you get to a fire and find that there’s no one in the building,” DiNardo said. “Property can be replaced … but not people.” 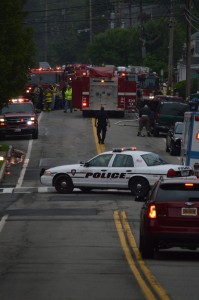 When the call to a fire comes, “There’s a real sense of urgency,” Steltz said. “You think about how fast you can get there to help.” And when he got to the fire scene on Monday? “When that propane tank was ripping flames … and you had to back out of the house, it felt almost like anger.”

He also recalled the Nelsonville fire in May. In his haste to get to that fire, Steltz didn’t even stop to put his socks on. “That fire was such a huge save,” he said of a blaze that could have spread to tightly-packed neighboring homes but didn’t because of the quick response by local fire companies. “You wonder if people realize how much you care.”

The interview with the three veteran firefighters could have gone on longer however DiNardo and Steltz had to get to the Garrison Fire Hall to be trained in administering Narcan, a drug that has proven a life saver in treating victims of heroin and other opioid overdoses. Once trained, they will pass that new knowledge on to their fellow CSFC members. It seems local firefighters do much more for the community than their name implies.