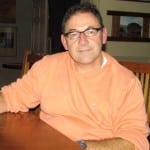 At the Tuesday (July 8) reorganization meeting of the Haldane Central School District, Joe Curto was not only appointed to fill a vacant trustee spot on the board, he was also elected board president. He replaces Gillian Thorpe, who resigned recently, and will serve out her term, which ends in May 2015.

Curto, who has served as president in the past, will be sworn in next week. Trustee Jennifer Daly was elected vice president. The meeting was also the first for newly hired Superintendent of Schools Dr. Diana Bowers.

One thought on “Curto Returns to Haldane School Board”