Mile by mile — or inch by inch on the unfurled map — efforts to create a walking-bicycling path along the fjord that is the Hudson River continue, members of the public, local governments, and environmental groups learned Wednesday night.

Attendees discuss elements of a draft map of the trail.

About 75 attendees gathered for the July 9 update at Dutchess Manor, a stately old mansion-event facility standing above the river between Cold Spring and Beacon — the two municipalities to be linked by the envisioned Hudson River Fjord Trail. The brainchild of government entities, non-profit organizations, and area residents, the trail would parallel the Hudson River, Route 9D, a state highway, and the Metro-North Railroad tracks, and start and end, south and north, at the Cold Spring and Beacon train stations.

One plus is the project’s broad support base, including “a lot of buy-in from municipal leaders,” said Mark Wildonger, a planner with the environmental group Scenic Hudson, one of the organizers of the trail effort.

Philipstown Supervisor Richard Shea, in a brief welcome, described the Fjord Trail as “a real model for the future of how public-private partnerships are going to proceed and help; how projects are going to get done.” Town Board members Mike Leonard and Nancy Montgomery also joined in the session, along with Putnam County District 1 Legislator Barbara Scuccimarra, Beacon Mayor Randy Casale, and Beacon City Council Member Peggy Ross. No Village of Cold Spring officials appeared to be present. The meeting followed a more intensive session last winter. 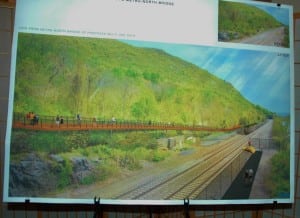 A two-man team from The RBA Group, the New York City-based consulting firm working on the project, assisted Wildonger in outlining activity to date, noting that the planners are narrowing their choices of exact locations for the trail — precisely where between river and mountains it will hug the ground, mountains, or waterside (or be elevated above them) as it winds its way along the river as a multi-use path accessible to all ages “from 8 to 80.”

Siting the trail, they explained, involves dealing with assorted challenges and players, among them Metro-North Railroad; the State of New York park system; governments of Cold Spring and Beacon as well as Fishkill and Philipstown and Dutchess and Putnam Counties; private landowners, wetlands bordering the Hudson, bridges and tunnels, and rugged terrain.

Then there’s the state Department of Transportation and the problem of speeding cars on Route 9D, especially between Little Stony Point (part of the state park system), just beyond the Cold Spring boundary line, and the Breakneck parking area to the north. Going north, the speed in part is posted as 55-miles per hour, despite the narrow, nearly shoulderless road and hordes of hikers walking along the berm to reach trailheads. The DOT recently painted a crosswalk at Little Stony Point and installed signs alerting motorists to the presence of pedestrians, RBA planner Chris Lucas observed. 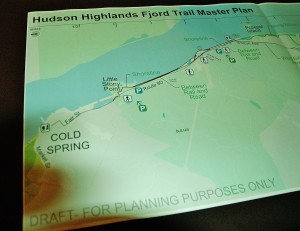 A draft map shows the beginning of the trail at the Cold Spring end.

Wildonger said a crucial aspect of the trail-building is making an impression on drivers to “really change the perception of 9D from this high-speed thoroughfare to … something pedestrian-friendly.” He and Lucas, respectively, mentioned that Assemblywoman Sandy Galef is pursuing funding opportunities for Fjord Trail improvements from approximately the Cold Spring sewage treatment plant on Fair Street, which leads north out of the village, and that the Town of Philipstown and Putnam County hope to extend a sidewalk from the village line to Little Stony Point. A key trail up the mountains begins at the parking lot across the road from Little Stony Point.

Route 9D immediately north of Cold Spring “is a really tough place to start” a trail, Lucas said. “As you can see, we’re very constrained” by existing features. “There’s a lot that happens in a very narrow space.” The terrain also is difficult farther north, he told the audience. While it may be feasible for the trail to use both sides of the highway, the planners “want to try to keep the trail aligned on the same side of Route 9D as much as possible,” he said. 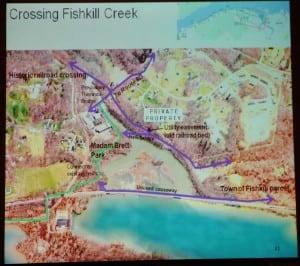 A map of the area near Beacon considers Fishkill Creek.

A long map, charts, and PowerPoint slides provided illustrations for the speakers’ remarks. Audience members viewed them and asked questions about the emphasis being placed on keeping the trail level, as well as about current traffic hazards and planned parking arrangements.

He also pointed out that given the landscape, “there’s just no way around that” up-and-down terrain but that if the trail could lie alongside the riverside whenever permissible, it would be much easier to keep it level and thus easily walked.

“We do want this to be accessible to the greatest number of people,” Lucas said.