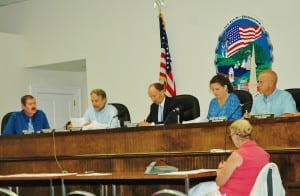 The Philipstown Town Board reviews documents at its July 10 meeting. Photo by L.S. Armstrong

At its formal monthly session, the board also got updates on efforts to deal with drug abuse, move the green touring trolleys to Cold Spring, and address situations involving the Garrison and Cold Spring post offices. Likewise, it heard a presentation on concerns about the proposed Algonquin pipeline project, which would affect Putnam County.

Citing the need for further information, the board postponed scheduled votes involving plans by the Garrison Volunteer Fire Company (GVFC) and the Continental Village Fire Department (CVFD) to buy pumper-tanker and rescue vehicles, respectively. In both cases, the board planned follow-up discussions with the fire companies.

Action on the Garrison pumper-tanker, already the subject of a public hearing and other board meetings, was scrapped at the GVFC’s request prior to Thursday’s session. But had the board gone ahead, the vote “would have been ‘no’ because we didn’t have the information we had requested,” Supervisor Richard Shea said. The board has pressed the GVFC for details of its finances before determining whether to let the fire company continue with purchase arrangements that involve bonding, a form of loan and debt.

Likewise, Shea sought more background information on the Continental Village Fire Department’s proposed $375,000 rescue truck. “It would be good for us to be a little better informed if there’s going to be an expenditure,” he said. Consequently the board delayed a vote on setting the date for a public hearing on that purchase.

Scuccimarra said sheriff’s patrol officers also received training, and Montgomery mentioned a forum she had attended that focused on the wider public. She added that she had been Narcan-trained and recommended that other residents become Narcan-proficient, especially family members, often the first to respond to a loved one’s overdose. “It’s great to have the general public trained,” she said. She also urged more attention to those under age 18, in the anti-drug abuse campaign.

Scuccimarra said the consequences of drug abuse reach into the Putnam County jail, with inmates increasingly suffering from drug-related medical crises. “The jail is becoming a hostel now, in some respects,” for treatment. “It’s a hardship for the sheriff,” she said.

Scuccimarra said that Vinny Tamagna, a Philipstown resident who heads county transportation planning efforts, “is working very hard to de-federalize the trolley so it can be parked here and used for routes here” instead of, under federal rules, being based in Carmel and brought to Cold Spring for weekend sight-seeing. Similarly, Tamagna is talking to Beacon officials so that the trolleys — there are two that back each other up — can run between Cold Spring and Beacon. Last summer, Tamagna began outlining plans to have the trolleys travel up and down Route 9D to Mount Beacon, stopping at trailheads between Cold Spring and Beacon, and going south of Cold Spring to nearby Boscobel.

Scuccimarra said she also wants the trolleys to go up Route 9, to such sites as Vera’s market, and down 9D to the Desmond-Fish Library in Garrison.

“It’s also another way for seniors to get around,” Shea observed, referring to the town’s elderly.

In a recent talk with the U.S. Postal Service, Scuccimarra said that she learned that searching for a place for a new Cold Spring post office “they’re still looking at four locations in Cold Spring. Two are on Main Street, which I think might be a problem.” Another site is somewhere on Route 9D and the USPS is also discussing options with Paul Guillaro, owner-redeveloper of the Butterfield Hospital property, she added.

Shea mentioned interaction with Garrison post office neighbors concerned about the after-effects of USPS upgrading to that facility. Last winter, the neighbors objected to the ramifications of construction and increased usage, including wear-and-tear to their private road. The road “took quite a beating” and requires repairs, Shea said. He said the neighbors were compiling a list of problems, which would be submitted to Rep. Sean Patrick Maloney.

Paula Clair, an environmental activist who serves on the Philipstown Zoning Board of Appeals, presented materials on the fight against a proposed fuel pipeline. Known as the Algonquin Incremental Market project, the pipeline would carry natural gas from the Marcellus Shale in Pennsylvania and — if sited as expected — snake under the Hudson River to the Putnam-Westchester Counties boundary near Indian Point, home to the Entergy nuclear power facility; cross Putnam County; enter Connecticut, and proceed into Massachusetts and Rhode Island.

In May, the Putnam County Legislature passed a resolution supporting a moratorium on the project until its impacts can be reviewed and serious hazards addressed. Clair asked the Town Board to pass a similar resolution. According to Clair, the pipeline poses serious health and environmental threats, including possible mishaps around Indian Point. “If there’s an explosion by Indian Point, that’s a big problem,” she said.

Shea asked his colleagues to review the materials Clair provided, so the board can vote on a resolution at an upcoming meeting.