One of the most oft-performed musicals of all times, Fiddler on the Roof, will bring the Russian village of Anatevka to Garrison in two separate productions, with the “Youth Players” (fourth through seventh graders) presenting the “Jr.” edition (abridged) from July 24 through 27, and then the “Teen Players” acting and singing in the complete, original version from July 31 to Aug. 3. 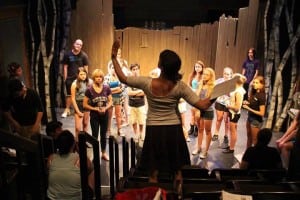 This is the first time that both summer theater camp programs have performed the same production. Along with being able to utilize the same set structurally (though it will be painted differently in the productions to best reflect individual themes of each incarnation of the show) both productions honor the Depot Theatre’s stalwart boosters, supporters and brownie servers, Rhoda and Marvin Needelman, who not only have spent many sunrises and sunsets serving up coffee and desserts at intermission, but have been a homegrown cheering, laughing and clapping support system for all who have worked at the Depot, children and adults alike, for many years.

Rhoda Needelman has been a presence at the teen production’s rehearsals, advising on correct pronunciations, customs and “pretty much showing us how we should carry ourselves — it’s so great having her here,” said a cast member.

‘Without our traditions, our lives would be as shaky as … as … as a fiddler on the roof!’

Fiddler on the Roof is just shy of 50 years old, having opened on Broadway, where it ran for nearly nine years, in November 1964. Its score, written and composed by Sheldon Harnick and Jerry Bock, somehow seems to be familiar not only to those who have somehow never seen it, but also those who never go to musicals at all. Audiences this summer will have opportunities to hear such favorites as Matchmaker, Matchmaker, Miracle of Miracles, Far From The Home I Love, and If I Were A Rich Man interpreted by voices from a generation so young it has yet to be given a nickname. 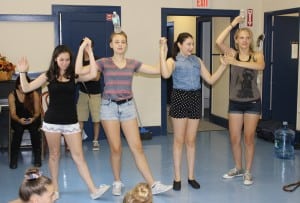 Balancing acting: an early rehearsal for the Bottle Dance number in the teen production.
Photo by A. Rooney

Generations — the conflicts between, the attachments that prove stronger than the clashes — are the theme of the show, based on the short stories by the writer Sholem Aleichem, who lived in what is now the Ukraine and wrote in Yiddish. The story, set in a small Russian village in 1905, centers around Tevye, a milkman and the patriarch of a family with five strong-willed daughters, the elder three of whom stand up to him in ways which test both long-held family and village traditions and which presage the galvanizing changes in Russia and the world which took place in the years soon following. The family drama is at the center of the greater story of the Jewish population maintaining their way of life in an increasingly hostile-to-them Russia. 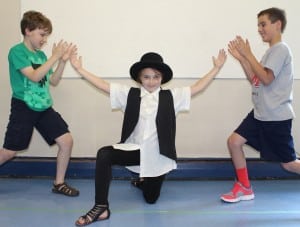 The two productions this summer will differ from each other in ways beyond the text used. Fiddler Jr. director Diana Hird says: “Our show is first and foremost about finding joy, even amongst our disappointments, frustrations and sadness. We are honoring the musical by discovering what makes our cast laugh. Middle schoolers love slapstick. So we’re finding opportunities to stage slapstick that makes this age group laugh. And, of course the show is also about change.”

‘The Papa, the Papa! Tradition.’

“Without giving away any spoilers, I think Fiddler Jr. audience members will be surprised by some of the new and creative ways we’ve re-envisioned this classic,” Hird said. “These changes are faithful to the script and the songs, but with a twist. Finally, you can’t talk about Fiddler on the Roof without asking yourself ‘What is a community? What brings us together as a community?’ By contrast, ‘What divides our community?’ We explore this in our production because all communities struggle with this question, from our own Hudson Valley Anatevka to all the Anatevkas around the world and throughout time. That is what makes Fiddler on the Roof timeless.”

For Katie Bissinger, the director of the teen production, the key is tradition. “I have tried my utmost to emphasize the sentiment of the opening number of Fiddler in every aspect of putting together this teen production. Traditions of all kinds loom large thematically in the show and I am teaching the original choreography by Jerome Robbins and reading them excerpts from the fascinating cultural history of the show by Alisa Solomon, Wonder of Wonders, which I hope is helping them to connect with the long tradition that they will now be a part of. I personally feel absolutely blessed and honored to be able to stage a theatrical gem like this on the 50th anniversary of its creation and as a bonus, I get to do it with phenomenally talented young actors. There really is a strong sense in rehearsal that we are creating something powerful and very special this summer at the Depot.” 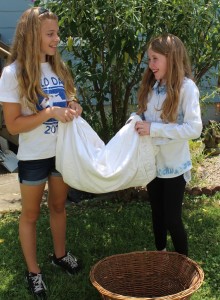 Emerson Smith, left, and May Columb, portraying two of Tevye’s daughters, fold a tablecloth in preparation for Sabbath during a Fiddler Jr. rehearsal.
Photo by Linda Speziale