It began, in a commonplace way, in fifth grade, with the school band. Given a trumpet to play, Ben Neill took up his third instrument, having started out with piano, (his grandmother taught the instrument) and guitar. Neill took to it right away.

“I was already excited about music,” he says, “and it was a way I could do music in a school situation.” Decades later, trumpets still at hand — traditional ones and an innovative one, called a mutantrumpet Neill invented — Neill has made a professional life in music, performing, touring and, most of all composing from the mad musical scientist’s studio located in his Garrison home.

A studio crisscrossed with cords and power strips, packed with electronic equipment, displays, keyboards, knobs to turn, levers to adjust, speakers and yes, an instrument or two. It is from within and beyond this studio that Neill has been working on one of his latest compositions, Manitoga, set for a brass quintet, which will have its debut at the site that inspired it in a July 26 performance. 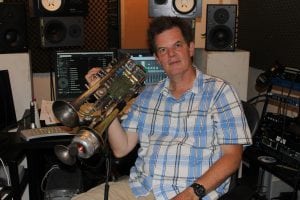 Ben Neill prepares to play his mutantrumpet.
Photo by A. Rooney

A virtuoso in the making

By eighth grade Neill was taking private lessons at the North Carolina School of the Arts, where he was also becoming exposed to many different kinds of music: “From Baroque to modern, I experienced virtuosity for the first time,” he recalls. “I thought: ‘I want to do that.’” Studying classical trumpet, Neill continued and developed an interest in popular music and jazz. “In college I started getting more interested in different kinds of contemporary music. I was fortunate to have a teacher who encouraged me to write my own. I started playing around with ideas.”

It was around this time that Neill developed his first “mutantrumpet” which builds upon the traditional design with additional bells and valves and incorporates a processing system with which to program it.

“It started by me putting an extra bell on it,” Neill said. “In college I was playing a lot of contemporary music and I used mutes to get different sounds. With a half dozen mutes, it became difficult to get them all on and off constantly. I got an idea to put on a second bell. That’s how it began.”

Over time, the mutantrumpet morphed into an electronic/acoustic hybrid with the addition of Neill’s first processing system, designed by Robert Moog, the inventor of the Moog Synthesizer. Moving to New York City, Neill said, “more and more, the mutantrumpet was what I was all about.” He continued to incorporate more elements and technology into this new instrument, much of it allowing for greater control.

“By the ‘90s, my music got more popular,” Neill said. “As a result of recording and performing I was able to mix up a career, and still do.”

As well as composing his own works, Neill has worked in the commercial arena, composing for advertising and television. His multiple performances of his work in New York City include all the notable homes of experimental music including the Knitting Factory, the Thread Waxing Space, Roulette and The Kitchen, for which he curated music for a number of years. He has performed his work at larger venues in the city, too — at Lincoln Center and the Guggenheim Museum, among many others, and has appeared around the globe at leading jazz festivals, museums, clubs and other performance spaces.

Along the way, he has recorded nine CDs, composed music for two films, created a music theater work commissioned by BAM’s Next Wave Festival, and collaborated on sound/visual art installations.

A move to Garrison over a decade ago, coupled with his position as associate professor of music industry and production at Ramapo College of New Jersey, has rooted Neill more in the Hudson Valley over the past few years. In fact, he, his wife, environmental art curator Amy Lipton, and their young daughter arrived in Garrison just one day after Sept. 11, 2001, “so it felt like a miracle.” They had come to visit and “it felt like a great spot. We looked all around and we loved it.”

Neill says he’s been much more productive since relocating his studio from Manhattan to Garrison and that “in moving here, my music changed as a result of the environment.”

Allowing Manitoga to act as muse

Neill says he’s “focused now on bigger projects, in tandem with teaching. In order to sustain a popular career you have to constantly tour.” Located not far down the road from that studio is Manitoga, the inspiration for one of Neill’s new works. As part of Manitoga’s new venture into site-specific performance, program director Vivian Linares, familiar with Neill’s work, asked him if he’d be interested in helping put together a proposal for grant funding. They did, and were successful in obtaining a New York State Council on the Arts individual artist’s grant.

In allowing Manitoga and the surrounding region to act as muse, Neill thought of an artist, Carol Szymanski, with whom he had worked with previously on a number of occasions. Szymanski sculpts bugles in the form of letters; a brass maker then fabricates her designs. 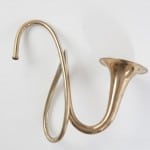 The letter ”A” in the form of a horn, designed by Carol Szymanski, one of eight to be used in Manitoga.
Image courtesy of Manitoga

“I was picking up on the military history around here, from the Revolutionary War to the playing of Taps across the river, bugle calls, hunting and horns,” Neill explains. Taking these bugle designs and imbuing them with what the name Manitoga means — “place of great spirit” — has led Neill to create a composition utilizing “a lot of spatialization. It begins with four acoustic players set at a maximum distance away from the house. They progress toward the house and as they do, the electronic part becomes more prominent, then we all play together. First you just hear the sounds from a distance. Some of the sounds will be responses to the natural sounds of the woods — I’ve been doing field recordings on site of the birds, insects and other sounds for use when we’re not in that environment. I’ve also been recording train whistles. Because each instrument is a different shape, each has a unique sound. When you combine them, it’s interesting. I’ve spent time figuring out which go together well and which don’t. There is a score, and also some of it is improvised … I will play one of Carol’s horns for some of the time, and use the mutantrumpet the rest of the time … I’ve found the sound travels across the water really well.”

For Neill, allowing for the unexpected to happen is part and parcel of the performance as well. “It should have a spontaneous feeling,” Neill said. “I don’t know what’s going to happen and that’s what’s exciting to me because it becomes a dialogue — something to play with.” According to a description from Manitoga: “The piece will end with all musicians playing in a concert arrangement. Following the last sound, the horns will be gathered to spell the word Manitoga; the instruments have arrived at their destination through their journey out of the wilderness.” 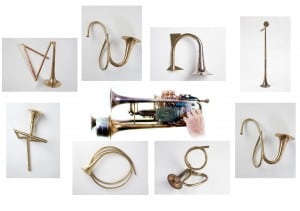 Manitoga will be performed at 5 p.m. on July 26, rain or shine, at Manitoga, located at 584 Route 9D in Garrison. Tickets, which cost $25 for general admission, are $10 for children 15 and under and free to members. They can be ordered through brownpapertickets.com. For more information visit russelwrightcenter.org or benneill.com or phone 845-424-3812.