Paul Guillaro of Butterfield Realty, owner of the old Butterfield Hospital site, said Monday (July 21) that he is engaged in serious discussions with Putnam County and the U.S. Postal Service over taking space at an inter-governmental building at a redeveloped Butterfield site, on Route 9D at the southern edge of Cold Spring.

In a telephone interview, he also said that he can give the Town of Philipstown and Cold Spring Village governments about two months, or until approximately Oct. 1, to make decisions about occupying space in the envisioned “municipal” facility.

Diane Ferris, general manager of Unicorn Contracting Corp., Guillaro’s construction firm, also said in an email on Sunday (July 20) that the company had sent letters of inquiry to the postal service and county, as well as to the village and town. Mayor Ralph Falloon and Supervisor Richard Shea, chief executives of the village and town, respectively, both received June 6 letters from Guillaro. “We have not heard anything from the Village of Cold Spring and Town of Philipstown” so far, Ferris told Philipstown.info. 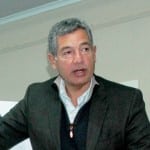 Guillaro said Monday the two municipalities have a little leeway yet. “I’m sure I could wait a couple of months. But I would like to know” their intentions and need that information in order to plan how to fit village and town offices into the building alongside the county or other occupants, should Cold Spring and Philipstown opt to take space, he said.

He added that he had not contacted Nelsonville’s government but left open the door to its participation in shared town-village services or functions at Butterfield. “Without the town and Village of Cold Spring being interested, I don’t think they [Nelsonville] would come in by themselves,” he said. For several years, the possibility of merging the town and two villages’ justice courts has been bandied about and this spring the Town Board hosted discussions of a three-municipality building department, although Cold Spring’s Village Board last week seemed to veto further review of the idea this year.

Falloon and Shea have both urged a common county-town-village approach to the question of Butterfield tenancy. Nelsonville’s Mayor Tom Corless has expressed reluctance to have his village included. [See: Cold Spring, Philipstown Officials Seek Unified Stance on Butterfield Occupancy, July 19]

According to Guillaro, a public, county-affiliated senior center is “absolutely” included in consideration of any county quarters at Butterfield. “It’s the focal point,” he said.

Should any or all of the local government entities not opt to take space, he said, he would open it up to other levels of government, such as state and federal agencies, as well as to private office tenants.