During a recent interview with Meg Rasmussen, senior park planner with Scenic Hudson, she said, “Go, slow, grow,” referring to the process of establishing plants. The first year they go, the second year, they’re slow and then in the third year, they grow. Patience is rewarded for gardeners who are getting new plantings set up with perennials. I’m finally witnessing the beauty of my labor with a perennial flowerbed I set up three years ago near the side entrance of my house.

Previous owners had used this prime spot as a grilling area and a large, homemade brick grill dominated the site. Right in front of the kitchen and faced on the other side by my office windows, it needed beautification. I’ve always loved the idea of landscaping for a view from any window in the house; it feels much more rational than landscaping for people who might be driving past. 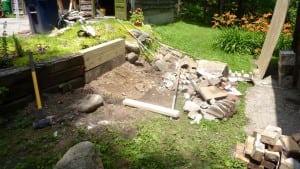 Before: After removing the built-in brick grill, this was the site.

Getting it ready for plants was a challenge even after we removed all the bricks. The soil was full of gravel that the previous owners had put down as a base under a concrete platform. In general, the soil leaned toward the acidic side of the pH scale and it was full of weeds. I scooped out as much gravel as I could and started adding compost and shredded leaves to improve the soil.

The process of choosing plants was pretty haphazard. I didn’t start with a plan or a guide. I visited plant sales at the Master Gardener’s, garden clubs and the Native Plant Center and picked out plants that caught my imagination and might fit the sunlight profile.

One side is more shaded than the other and I chose accordingly but even then, the plants I put in the shadier side aren’t doing well and should be moved. They’re in mostly shade during the spring, but by mid-summer, the angle of the sun has moved enough that the bleeding heart is unhappy and the hellebores don’t thrive.

All of the plants were put in as small transplants, not seeds. The sunnier side started with Evening Primrose or Oenothera (Lemon Sunset). It has bright yellow flowers and blooms prolifically for a couple of months in the summer if I keep deadheading it. It’s about 20 inches tall and has lacy foliage and is covered in flowers. Deadheading is kind of a chore because there are so many blooms. Bees love it and it’s spread a bit, but not aggressively.

I put a heather plant in next to the primrose and it never did well. If I use heather again, I’d create an area for a collection of many plants. One alone doesn’t have much impact and easily gets lost; a patch would be lovely, though.

Then I had a few stragglers that never did well and I left too much space between plants, not sure how to balance giving them room to grow and wanting a filled-in bed that would crowd out weeds. Last year I filled in with a beardtongue or Penstemon and this year, it’s my favorite plant in the bed. 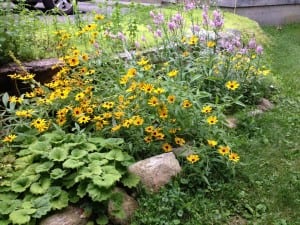 After: Three years later, native perennials attract bees and make a nice view from the house.

It’s a tall, showy plant with tubular lavender flowers that all seem to have a bee nestled in. It’s a native plant and it’s doing spectacularly. It’s spread nicely and now there aren’t any gaps for weeds to fill in. Next to it a brown-eyed Susan or Rudbeckia variety with lacy flowers is rising up to meet it.

On the shadier end, I’ve put in hellebores, which bloom first thing in the spring no matter how harsh the winter was, scented geraniums, foam flowers and a Columbine or Aquilegia, that blooms prolifically for a month in June. All are native plants that can take part-shade and have done beautifully. The shadier side blooms early, then the sunnier side takes over in mid-summer through fall.

Because of its placement, this spot heats up last in the spring, which I discovered by planting early-blooming bulbs. The daffodils in this spot will bloom several weeks later than in other parts of the yard.

Now that the bed is well mulched, all I do is add a layer of shredded leaves and compost in the spring, but no other fertilizers. I do a little bit of weeding, about 15 minutes every two weeks, and no watering now that everything is settled in. Pests or diseases haven’t been a problem and I’ve never used any herbicides or pesticides. It takes care of itself and provides a lovely view from my office windows.