Seven artists on view in Part Two of the series opening Aug. 1

The second of the Buster Levi Gallery’s summer Collective shows featuring the work of seven of its members, opens on Cold Spring’s First Friday, Aug. 1, running through the end of the month. Each of the participating artists has provided an image of their work and a short description of or thoughts about their work overall or a specific piece. Click here to see the work of another group of seven, who showed their work in July. 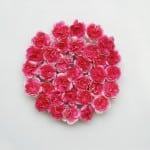 My work in this show is just for looking (not for sale). I made it because I wanted to see what it would look like. It made me feel unencumbered and I like watching it change.

The paintings exhibited in Collective Part Two were made in July 2014, at the American Academy in Rome, where I was a Visiting Artist. These works reflect a continuation of the Mithras Series begun at the Academy in 2012.

The many ancient sites I visited inspired these paintings along with Roman civilization and its pagan Mithras worship sites, historical churches and temples dating back to the first century AD. In addition, the rich Italian culture reflects my experience and interpretation.

My interests lie in staring down the mundane and finding the beauty — sometimes terrible — within the stare. It seems that by carefully observing something that is by most accounts banal or even disgusting, and by playing with that image in paint, I can dig at some larger inner truth, whether humorous or moving or a combination.

All of my work is to some extent based on observation. The paintings in this collective group show are not an exception as they are based on my observations of different shadows or light that I experienced either walking, riding a bike, sitting outside as well as sitting inside a room.

Even though the work is based on actual visual experiences, my goal is not verisimilitude. Rather, I take liberties by juxtaposing different images on separate panels, as well as experimenting with composition, color and/or process to help convey emotions I may have felt at that specific moment.

My recent paintings are a result of a revived interest in painting the landscape. Working from real settings, the focus nevertheless, is on reconstructing the spatial, color and rhythmical forces of nature painted expressively. I connect past modern movements with the present — striving for fresh, authentic ways of seeing.

Some of my canvases are scraped down to other unsuccessful attempts at achieving a desired image-painted over — leaving a memory of a place that still lingers. These pictorial inventions are achieved through searching calligraphy with a tactile presence animated with personal color.

My Hudson River paintings are inspired by the seasons, the movement of water, barges and Indian Point nuclear plant. My abstract paintings Pies & Ponds are informed by observations of water and human nature. I use illustrator to create templates which I paint intuitively creating a sense of play and thought.

I manufacture my own translucent painting surfaces using urethane and nylon. For my woodcuts I use the Japanese woodcut technique called Moku Hanga. I work in these two medias because they inform and enrich each other.

Abstraction and fragmentation along with the interplay of positive and negative space as it relates to form are the elements of my photographs.I am drawn to the beauty in the world that surrounds me, both man-made and natural. Buildings, still life and landscapes each become part of a reconstructed image. These transformations are inspired by the cubist concept of revealing an object from different points of view.

While I am interested in the individual photographs, it is in their reconstruction that I focus. Capturing fragments, linking them to each other, are the means I use to communicate my vision of our world.

The artists’ reception is scheduled for Friday, Aug. 1, 6 to 8 p.m. The Buster Levi Gallery is located at 121 Main St., Cold Spring. Visit busterlevigallery.com.