An all-hands turnout becomes dress rehearsal for what might happen

Bill Rimm had other plans for last Saturday night. But because as a member of the Garrison Volunteer Fire Company (GVFC) he carries the moniker “Chief” before his name, life can bring more schedule interruptions and surprises than most of us have to endure. 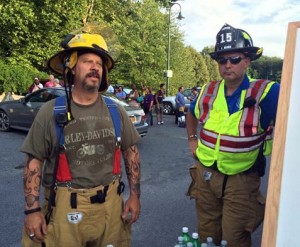 At 5:51 p.m. on July 19, Rimm received an electronic notification from the Putnam County central emergency dispatcher of a possible “mass casualty incident” centered at the Garrison Metro-North train station. While fellow volunteers from his company and all the other companies in Philipstown assembled at their firehouses to marshal vehicles and other resources, Rimm, age 35, raced directly to the scene. Given the location, Rimm was the designated local incident commander. His immediate task was to proceed to the station to meet the train to further assess the situation and direct the necessary response.

En route via radio he began the protocol for a large-scale event. All he knew was that rocks from a hillside under repair had fallen onto the Metro-North Hudson Line tracks and blocked train traffic in both directions. The event forced a southbound train headed for the Peekskill station back to the Garrison train station with hundreds of passengers aboard.

The dispatcher, informed of the incident by the Metro-North police, subsequently summoned other fire companies and multiple ambulance corps as required by the mass casualty operations plan.

As Rimm recalled the back and forth with the dispatcher there was talk of a boulder striking a train and so his mind was racing through “all the scenarios of what potentially could be happening.”

One of the first decisions Rimm made was to established the Garrison Union Free School school parking lot on Route 9D as a staging area for ambulances and other emergency vehicles. He wanted to minimize the number of vehicles traveling on the two narrow twisty roads that lead down to the train station. The staging area also allowed for a quicker response to any other incident occurring in the town.

“I also had fire police close access to both roads to the station (Upper and Lower Station Roads) so we could get people out to hospitals if needed,” Rimm said indicating he anticipated traffic from civilians or car services seeking to transport stranded passengers.

When Rimm arrived he encountered a large crowd of people milling about. The first thing he did was to organize an assessment team including emergency medical technicians to systematically go through the crowd and determine the collective health status.

Although it ultimately took 40 minutes to interview each person Rimm saw early on that fortunately people were suffering mostly from aggravation and impatience as well as some dehydration and the growing need for bathroom facilities. There were no incident related injuries.

The Garrison station is the epitome of a country train station — “It is a stop in the woods with a parking lot,” Rimm said, noting the absence of infrastructure beyond a platform and elevator with no nearby food and drink establishments. 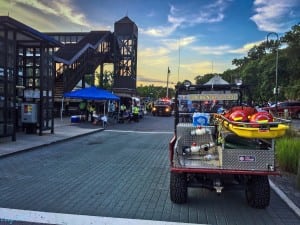 Rimm did what chiefs are supposed to do — he thought on his feet and improvised. He sent a truck to pick up a couple of portable toilets from the nearby Philipstown Town Park. He also sent people to acquire water and other drinks from the GVFC firehouse and to purchase more from area markets. He acknowledged there was a cost attached to the decision but said: “Sometimes you overlook costs in favor of the human dimension.”

The crowd at the station grew as Metro-North sent trains south to Poughkeepsie to discharge passengers to eventually meet shuttle buses to Peekskill. Rimm estimated the crowd reached 800 at its height. As part of the triage operation older people and parents with small children were organized for the earliest bus departure.

Recollecting events only a day after, Rimm expressed gratitude the event turned out to be far less than originally anticipated. “We basically turned it into a large training exercise.” He said he thought the operation went well, all things considered, underscoring that each event has unique characteristics and consequences.

Rimm recalled the December 2013 Metro-North accident that killed four people (including Philipstown’s Jim Lovell) with scores of people injured as a wake-up call as to the potential of a train incident. Last Saturday’s event only heightened his concern. He said his company’s officers would sit and go through the response and formulate questions first for themselves and then ultimately for the county and Metro-North officials.

He said Metro-North has offered specific firefighter training for responding to a train accident with regard to door openings and other train operation issues. But he said there was not regular interaction regarding communication and coordination or other broader response issues with his company.

He wondered aloud about the consequences of a train incident located in the remote outer reaches of the tracks between Garrison and Peekskill rather than at a station.

The dispatcher alert that began the mass casualty incident response originated, as all Putnam County 911 calls do, at the Office of Emergency Management (OEM) call center in Carmel. The OEM seeks to coordinate all first responder events and also provides the training regimes that certify volunteer companies and ambulance corps members for their appointed tasks.

OEM Commissioner Adam Stiebeling in an interview said he believed the number of people involved in the initial reports justified invoking the mass casualty incident plan. “It’s better to put things in motion and then be able to hold them back than not having them when you need them,” he said.

Stiebeling said he agreed with Rimm’s assessment that the operation went reasonably well based on his review of early reports. “We demonstrated an adequate response and would have been able to sustain it as needs required.” Stiebeling was not part of the actual response team. Cold Spring Mayor Ralph Falloon, a professional firefighter, represents the county emergency response team in Philipstown and was on the scene working with Rimm.

Stiebeling said he did not hear talk of damage to a train on any of the recordings of radio and phone traffic during the incident.

The commissioner described the relationship and ongoing communication with Metro-North as good and said there were regular discussions with safety officials and MTA police over issues. He said there would definitely be a follow-up meeting over the Garrison incident, including local responders, once all the relevant agencies had finished their own assessments “to openly discuss how the event was handled and what the strengths were and any items we might want to address in the event of another incident.”

He agreed with Rimm that the derailment in December had caused “all agencies to sharpen their pencils.”

Stiebeling readily acknowledged that volunteers are the vanguard of any local response to a large-scale accident on the train line and that training and coordination are kept up to maximize the effectiveness of any response. He said plans were in place to broaden a response to as many other first responders in surrounding towns and counties as might be needed. He also said that the county and local responders would have recourse to recover some expenses related to the incident.

Metro-North through a spokesperson’s email affirmed that an investigation of the incident is underway.

According to the email, workers for the rock remediation company ECCO III “were ‘scaling’ that is using hand tools to loosen small rocks. A protective mat had been laid on the track under the cliff to catch the small pieces. Somehow, a much larger, 3-foot diameter boulder came loose and fell onto the track, damaging one rail on Track 1 and bouncing onto the adjacent track damaging another running rail.”