With childhood growth spurts, it is a parent’s lament that things are outgrown before they’ve even been broken in. This is doubly the case with athletic wear and gear, where fit can be critical. The fluctuating desires of kids who express enthusiasm one day, only to have it wane the next, can also lead to frustration when that expensive piece of equipment once so critically important instead languishes in a garage. 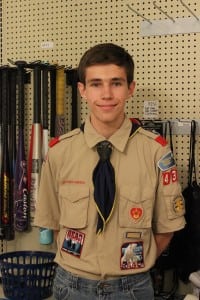 Steven Casement, who just graduated from Haldane, has changed all that. As his culminating activity in Boy Scouts, the Eagle Scout Project, Casement has established the “Athletic Swap Room” (ASR) at Philipstown Recreation’s community center — a place for athletes and their families to donate gently used or better condition athletic clothing, shoes and gear and, equally, a place where such goods can be obtained, free of charge, by those in need of them.

What was originally a storage area has been turned by Casement into a well-organized showroom with shelving labeled with a wide range of sports, including lacrosse, hockey, skiing, tennis, badminton, ice skating, golf and “sidewalk sports” along with the most popular: baseball, softball, soccer, football and basketball. The ASR is expected to open by the end of July; check with Rec for updates.

To bring all of this to fruition was no easy task. John Maasik, chair of the Philipstown Recreation Commission, describes the process:

Steven approached the Philipstown Recreation Commission at a recent monthly meeting. He was looking to produce an Eagle Scout project for our recreation program, which he had benefited greatly from while growing up in our town. Working with the commission and the director of recreation, Amber Stickle, several projects were discussed. Prompted by the recent addition to our programming with the ice rink outside of Rec, and the many requests for ice skates, we all determined a sporting goods swap room would be a useful addition.

Hitting one out of the ballpark to earn Eagle Scout rank

From Casement’s perspective, once the idea was settled upon, he got to work. One of the parameters of the Eagle Scout program is that the planning and the work must be coordinated and directed by the candidate.

“You can’t use your own money and just go out and buy ready-made material,” Casement said. “You have to plan and fundraise… Before the project starts it must be approved by the Boy Scouts Council and afterwards you submit a whole packet of paperwork which is reviewed. You also have to travel and meet with them. You have to show them proof of your project, including maintaining a time log, detailing how many people it took, the supplies, what you expected to get done, the notifications made to people who could help, for instance ‘I need help from six people today for three hours,’ and you are supposed to get help from more than just fellow Scouts — they like to see that you’re pulling different sources.” 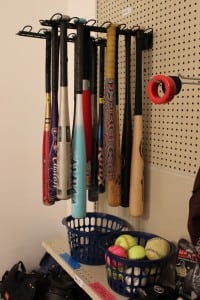 Bats and balls — baseball, softball and beyond — all to be found at the Athletic Swap Room.

In terms of the project itself, Casement details: “For the shelving, I had to measure everything and then try to find the right sizes. I went to someone who was downsizing his personal sports equipment store — he helped a lot.” For the equipment donations, Casement created flyers and arranged for them to be emailed to the Haldane Booster Club and high school/middle school parents. He set up donation bins at Haldane, and got notices put up on Facebook. He liaised with the Church on the Hill, which hosted a weekend tag sale that yielded many donations, and he spoke at every Mass on a recent Sunday at Our Lady of Loretto to further the cause, resulting in filled bins.

Each Eagle Scout candidate is required to choose and work with a project coach, and Steven asked his father, Gordon Casement, to do the honors.

“You choose someone you think will be very hands-on,” says Steven. “My dad was a carpenter when he was younger — he now does appraisal work, so it was perfect.” Gordon Casement also reached the rank of Eagle Scout; his project involved renovating a rundown parking lot in Poughkeepsie near his church. Decades later, according to Steven, it is still in use.

Casement’s project has been greeted with a universal “great idea,” he says, with people equally eager to locate equipment and to find a place where they can dispose of unused items taking up space in their homes. An anonymous donor contributed a great deal of tennis equipment, including many rackets. Going forward, all donations will now come through Philipstown Recreation.

Anyone wishing to donate will need to do so during Rec’s business hours. They should simply stop by the office, and someone will accompany them to the ASR and find the spot where it should go and put it in, simple as that; likewise for obtaining items. There is no requirement that one must donate in order to take. Rec’s primary request is that everyone who uses it keeps it organized, so things don’t get strewn.

As Casement eloquently puts it: “You come when you have a need. When you have something to give, remember where you took it from.”

If a sport is not represented already, a new spot can be created. In addition to the “gently used or better” requirement, the only other rule is that things must be portable, making donations of things like “portable bowling lanes” or trampolines and their ilk unacceptable. 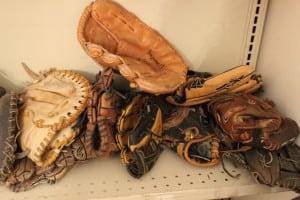 Take your pick of gloves and mitts at the Athletic Swap Room.

Maasik calls Casement “great to work with” and feels that the room is a “great resource for the community. Kids grow out of their sports equipment so fast that most of the time it is barely used. This room will give people the chance to get more use out of equipment.I hope that people use the room to its potential. The room will be what the community makes it.”

Rec Director Stickle concurs: “There has long been a need for a sporting goods swap by members of our community, and Steven tackled this project with enthusiasm. We are thankful to him and the other members of Philipstown Troop 437 who assisted Steven in making this Eagle Scout project and community need a reality.”

Along the Boy Scout trail

According to Casement, about 3 percent of Boy Scouts make it all the way through to become an Eagle Scout. Philipstown Troop 437 consists of boys from sixth grade (who cross over from Cub Scouts) through age 18. By the latter age those Scouts are effectively acting as leaders. The troop meets two or three times a month and assists on various community projects. They also participate in a yearly trip to Camp Read, in the Adirondacks, where they learn the skills which help earn them the merit badges necessary to continue in Scouting and some of which are required to become an Eagle Scout.

Casement, who will attend Le Moyne College in the fall, plans on becoming a secondary school history teacher. Asked what he felt he gained most from his years in Scouting, he reflected: “A lot of life skills, like first aid and wilderness survival, but most of all it’s being able to lead — leadership and preparedness, definitely.”